on 16th December 2021 I got my annual energy statements, and revised the figure to 7.56 tonnes of CO2 equivalent – details shown in blue.

The calculator I use is www.carbonindependent.org/ – I think it’s more accurate than the WWF one, especially in allowing the actual amount of domestic gas and electricity to be entered. Here’s a detailed breakdown of how the total is arrived at – with my comments – as of 13th August 2021.

There’s only one of me, so my share of “household” energy use etc is high at 100%. I minimise overall energy use by not heating – or using – the front room and the guest bedroom above it unless I have visitors. 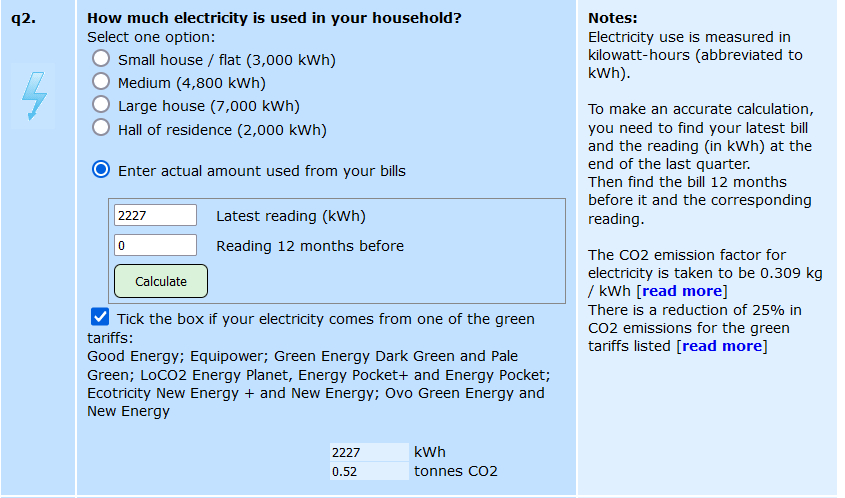 Their reference list is out of date (2013), and does not include Octopus (my supplier) who have built a significant amount of renewable energy capacity. Nevertheless, the point is well made that it isn’t just the source of electricity, there are other factors. Sadly, there’s no way way of allowing for my small solar photovoltaic panel installation’s effect. 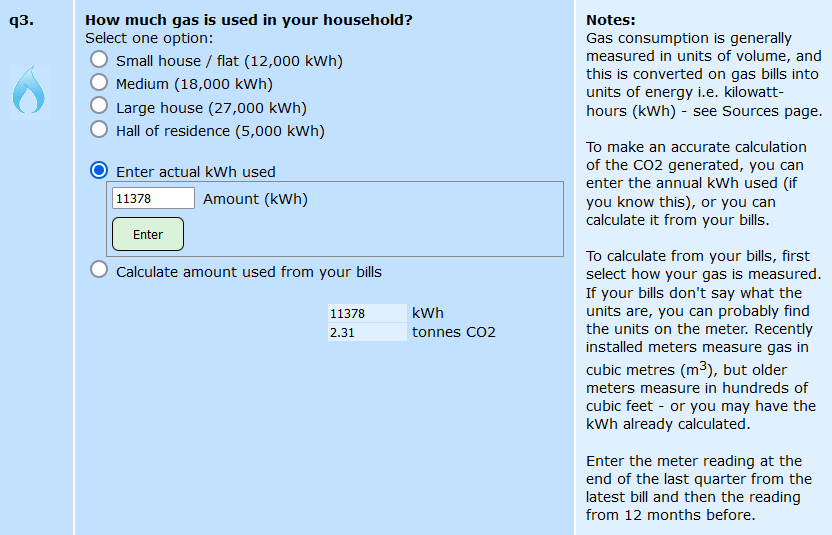 OK, this is pretty scary! I use gas for cooking (I prefer it, and there was no connection point for an electric cooker in the kitchen when I moved in). I also use gas for most heating – the high-efficiency condensing combi boiler was installed in February 2016. But I use Octopus Energy on a carbon-offsetting tariff (details here), and there doesn’t seem to be an allowance for that. I’d allow 25% – as for electricity – though I suspect it’s more than that in practice. So call my net gas usage impact 1.75 tonnes CO2.

I do have to keep the occupied rooms fairly warm – my dodgy back and other arthritic areas seize up completely in winter if I don’t keep temperatures in the 21-23C range. Extra layers of clothing aren’t an option as they put stress on joints when moving – though a blanket when sitting down is useful.

Update 16th December 2021: annual gas statement gave my usage as 11,190 kWh, which is not much of a change. That gives a CO2 emission of 2.27, almost unchanged, and allowing for it being a carbon-offsetting tariff, I’ll stick with the estimate of a 25% reduction giving 1.70 tonnes of CO2 in practice.

I use a woodburning stove a couple of times a week in winter, which heats all the inhabited bits of the house without using the central heating.. It’s a DEFRA-approved model (a small Morso Squirrel). The fuel is actually artificial logs made from compressed sawdust. As I’m not sure whether this would be “waste” (and so effectively composted, producing the very potent greenhouse gas methane) or there’s another use for it, this figure can stand as it is. 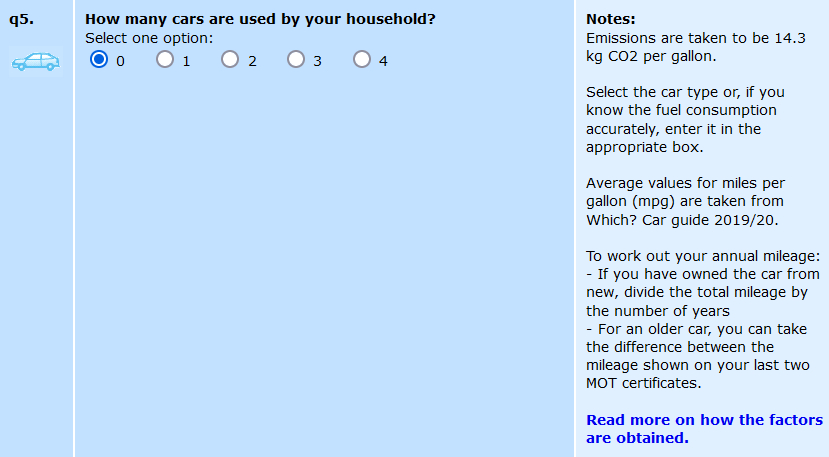 I’ve never driven – having spent most of my life in London it was never necessary. Since moving to Worcester I’ve relied mainly on an electric bike, plus public transport, though I do do somewhere around 100 miles a year by taxi – call it 50kg of CO2 equivalent. 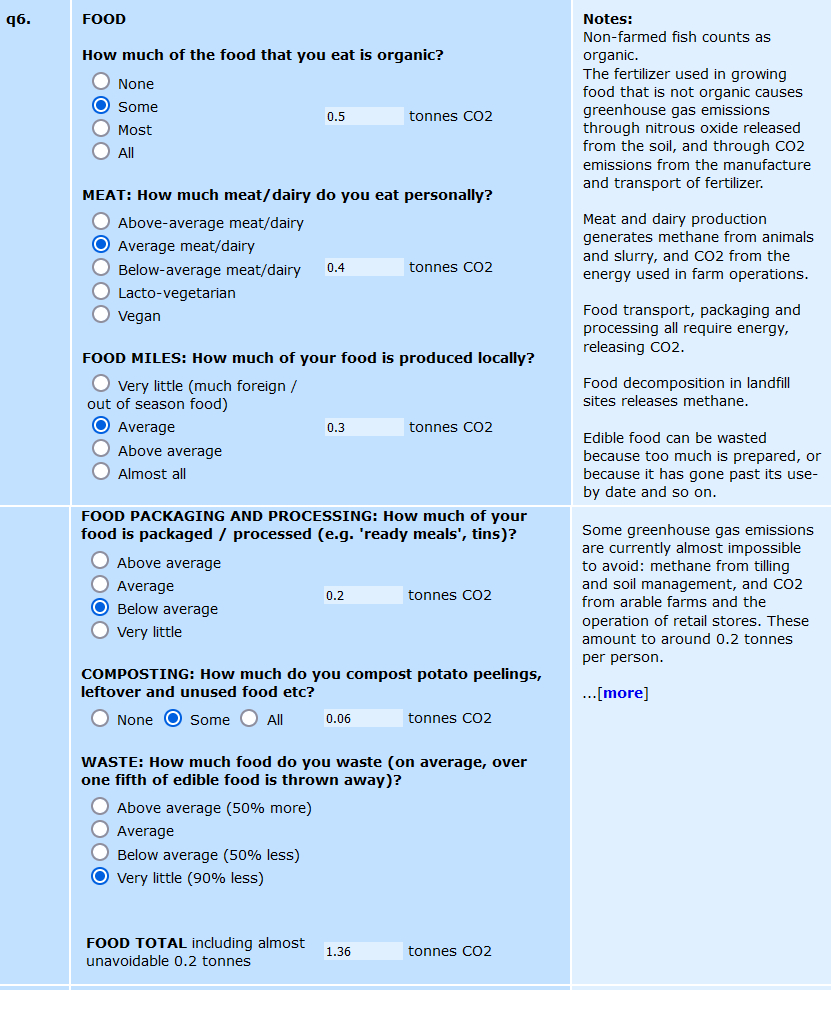 Organic. There are some foods that I only buy if they’re organic (such as chicken – there’s something, probably an antibiotic, used in factory-farmed chicken that makes me unwell). Things likely to have high pesticide residues, like carrots, I prefer to buy organic. And, of course, my home-grown fruit and veg are organic. But my limited income doesn’t allow a fully-organic diet.

Meat and dairy. I’ve been gradually cutting down on meat, and now have a couple of meat-free days a week (working up towards three). I do have lot of milk and dairy products – due to taste, due to avoidance of the palm-oil that many non-dairy spreads incorporate, and due to the need to keep up my calcium intake (due to osteopenia).

Food miles. I’m putting “average”. I do generally buy seasonal fruit and veg, which is often UK-sourced, but rely on supermarket deliveries as I can’t carry anything much so there are warehousing and delivery miles.

Food packaging and processing. In general, I cook from raw ingredients. Exceptions are sausages, tinned tomatoes and tinned sweetcorn with the occasional can of beans – I really don’t do any kind of ready-meal.

Composting. This depends on the prevalence of rats in the compost heap! In general, I compost what I reasonably can … ie anything not cooked, but no meat.

Waste. I do what I can, but reliance on supermarket deliveries means that salads and veg are rather at risk. Supermarkets seem incapable of packing things in quantities suitable for single-person households, despite us making up between 1/4 (London) and 1/3rd (Scotland) of all households.

No argument about this, really: it’s the cost of living in a society.

It’s almost exactly a mile into town, and I catch the bus when I’ll have to carry back shopping which would be awkward or impossible on the electric bike. Probably a bit more than once a month, and although I now have a free bus pass I don’t see this changing, as I do rather detest waiting for a very erratic bus service! 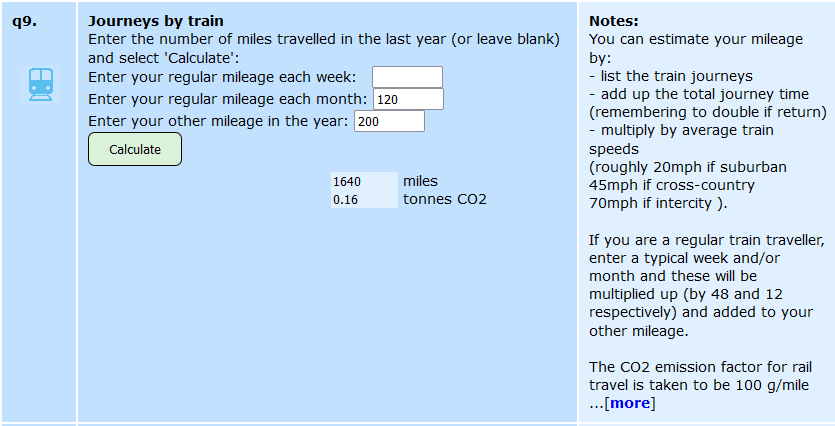 “Regular” travel is roughly-monthly trips over to see my Mum. “Other” is to do with my annual Broads holiday, and a notional one trip a year to London. It’s a massive reduction from three or four years ago, when I was doing 20 or 30 trips from Worcester to Bedford and back (to see Maurice) every year.

I haven’t flown anywhere for five years, and won’t fly abroad in future. However, I’m not ruling out flights to Scotland at some point: my back really struggles with 6-hour train journeys (and the sleeper train is expensive!).

Miscellaneous spending. I’m answering “below average”, partly because my income is significantly below average!

Recycling. There’s kerbside recycling of paper, glass and tins in Worcester, and I’m pretty good about this. I do recycle appropriate plastic (though it isn’t always clear what exactly is appropriate!). Shamefully, I don’t currently recycle plastic bags, except to Ocado delivery ones which they collect on their next visit. 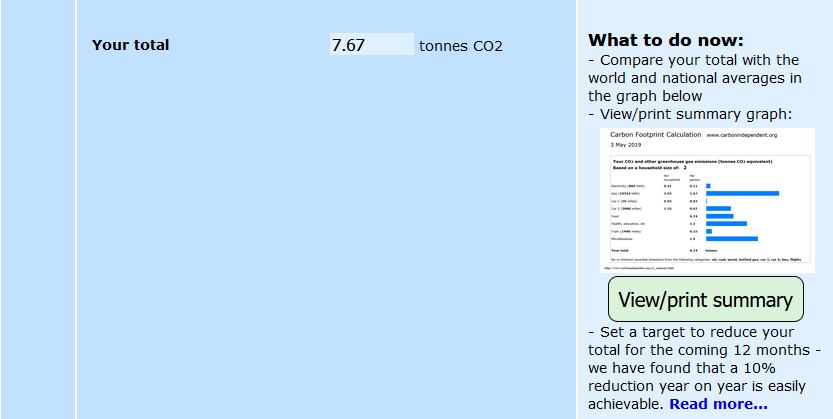 This is just over half of the UK per-person average.

Making the adjustments up and down as I’ve described above, I think a revised total of 7.16 would be fair.

on to “supporting nature and the environment“