Tuesday (2nd June) was not a good day. Actually, it started on Monday, during my walk: I started getting angina twinges as I was walking (on the level !) back through Perdiswell Park. It persisted, with varying strength, until after lunch on Tuesday. Not exactly painful, more of a squeezing sensation.

So, I thought I’d better check it out. I called NHS111, who sent an ambulance. A couple of ECG scans and some blood pressure monitoring later, they decided on hospital. That was what I’d been worried about – not that I dislike hospitals, but at the moment fear of catching CoViD-19 is still very high, as I have a couple of areas of “vulnerability”.

So, off to WRH. A&E was not crowded – I think I’m not the only one still worried about coronavirus! I was parked in the converted corridor, and bloods taken. Unfortunately, I was parked nearly opposite the doors to the Resuscitation Room, which was clearly getting prepared for something serious – as the doors opened, I could see staff gowning up in full protective gear. Then an emergency team rushed in, in full breathing apparatus, surrounding a patient in a tent-type-thing. Pretty scary. Then the team in Resus. obviously wanted things – ordinary staff were allowed as far as the doorway, but had to hand things through and were not allowed in. All was explained when notices were stuck on the door: “Covid RED ROOM” “Full PPE must be worn” No admittence except to authorised staff” and so on.

I saw the Duty Consultant in pretty short order – only a couple of hours. He was great, and immediately confirmed that I has not had a heart attack. However, he was worried by my dizzy spells (I’d just about fainted when I sat up from lying down, so he could listed to my back), and suggested he discuss me with a colleague and that I stay in overnight, to which I agreed. A transfer to an actual bed in the Medical Assessment Unit followed.

Fortunately, although there was no phone signal, the NHS WiFi proved excellent, so I was able to email Sim and ask him to call Mum – I didn’t want to alarm her by just sending a bare email! Too late for a proper meal, but a couple of NHS sandwiches at 300+ calories each stopped me starving. After further discussion, it was decided to take more blood, to do a d-dimer test (which checks for evidence of clotting such as deep vein thrombosis,). First attempt to take blood went really painfully wrong, but a second attempt an hour later went OK. There was an outside chance my symptoms could be attributed to something called “aortic dissection”, which is an emergency requiring rapid surgery. Fortunately, this proved not to be the case!

A rather disturbed night (the ward was noisy), and I gave up and got up just after six. I did try to keep my strolls out of the ward down to once every two hours – necessary not just for a quick e-cig, but also (actually mainly) because my back was really painful. The chair and bed were not good for me: I painfully hobbled out of the ward, with my ability to walk gradually improving on the journey through A&E and the reception area, and by the time I’d walked around for ten minutes I was walking normally on my return to the ward.

A very stodgy lunch (veg soup, chicken casserole with croquette and mashed potato, very overcooked mixed veg and leeks, followed by sticky toffee pudding and custard) played hob with my calorie count and attempts to avoid high-GI carbohydrates, but was tasty enough. I had a little snooze straight after it! It was decided that my dizzy spells might be related to taking non-modified-release isosorbide mononitrate, as that meant peaks and troughs of it in my system, so I agreed to try modified-release once a day. Previously it hasn’t worked for me, but they’ve upped the dose a bit, so we’ll see how it goes. My blood pressure does seem to vary – usually around 127/85, but sometimes about 115/65 which is really too low. Doesn’t seem to be related to posture, exercise, or anything else much!

Released just before 4pm, and home by cab (still wearing my hospital-supplied mask), so I was away for almost exactly 24 hours. Between stress and lack of sleep I was very wrung out, which continued into Thursday (when I did absolutely nothing and didn’t leave the house).

I’ve typed this up on Friday afternoon. Halfway through, I went out to the pharmacy (prescription from Elbury Moor has not arrived, although ordered last weekend), and Co-Op for milk. MapMyWalk tells me it was 0.72 miles, 2012 steps, in 23 minutes – rather slow, even allowing for time spent in shops. Still, I was deliberately not walking fast … I’m not over the “episode”, still feeling a bit breathless, occasional angina twinges, and generally a bit under par. Hopefully that will improve over the next couple of day and by the time the weather gets warm again I’ll be able to go for more sensible walks!

A very quick scamper round the garden this morning, between showers. Mainly to fit new tree ties to the Glastonbury Thorn, which was swaying rather alarmingly in the very gusty wind.

However, I did notice a couple of “openings” – the first Alstroemeria, and the first Cosmos. I’m pleased about the latter- it was from home-saved seed, and these plants are so variable that one never quite knows what one’s going to get in the way of flower colour! 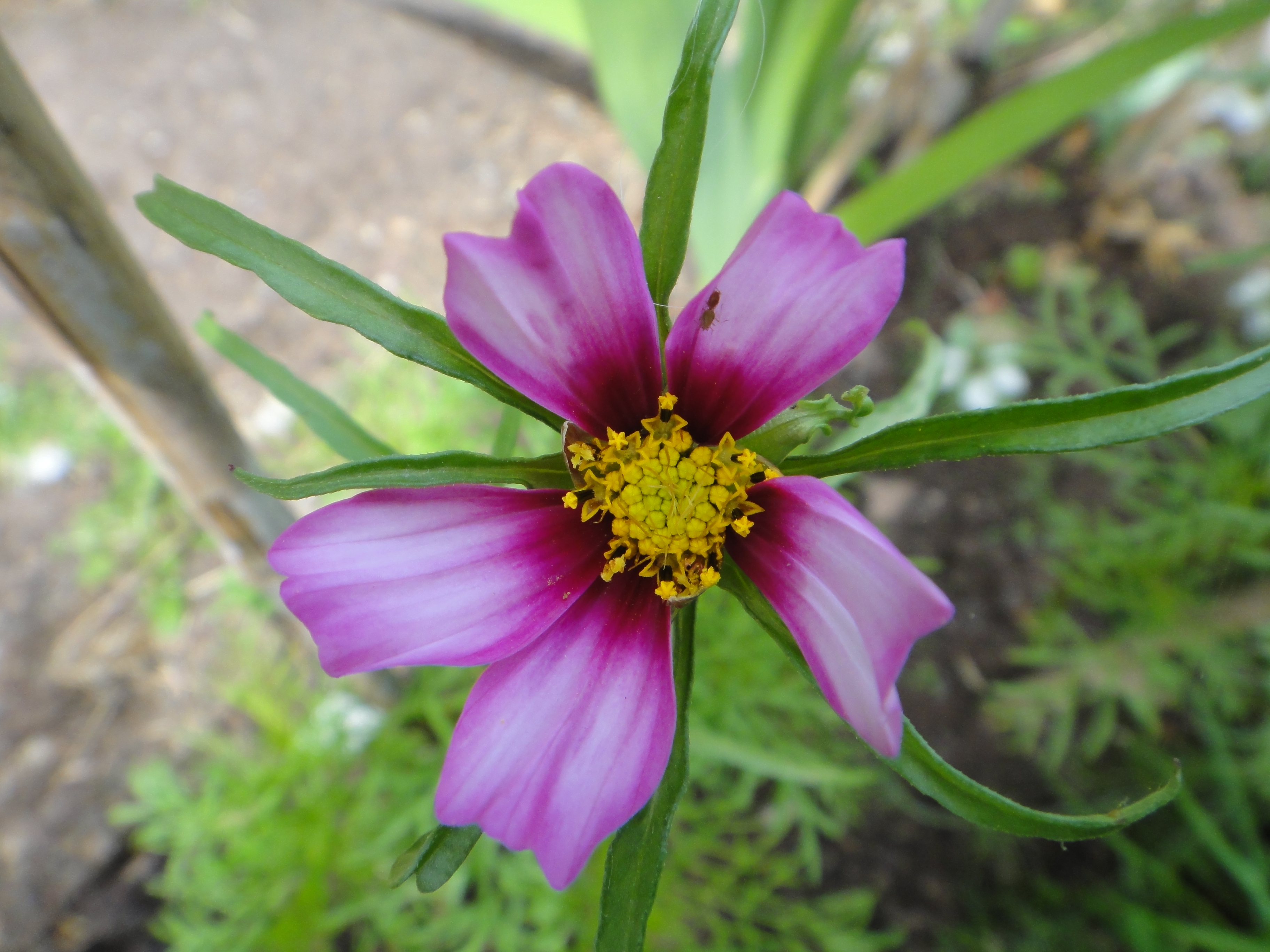