The drumstick alliums (Allium Sphaerocephalon) have come into full bloom, and are attracting masses of bees. It makes a change – usually, it’s mainly bumble bees in my garden.

Elsewhere, the agapanthus is in full flower: an almost incandescent blue in the shade of the fence. The geranium on the patio has more flowers than I’ve ever seen on it before, and the wandflowers are nodding gracefully up by the pond. The largest tomato on the Black Russian is now the size of my fist, but only vaguely thinking about changing colour and ripening.

Yesterday saw the first flush of colour on the “Latah” tomatoes, and when watering the Chinese Lanterns today I noticed that the first of these has also started to change colour. It’s an early sign of autumn, I suppose. 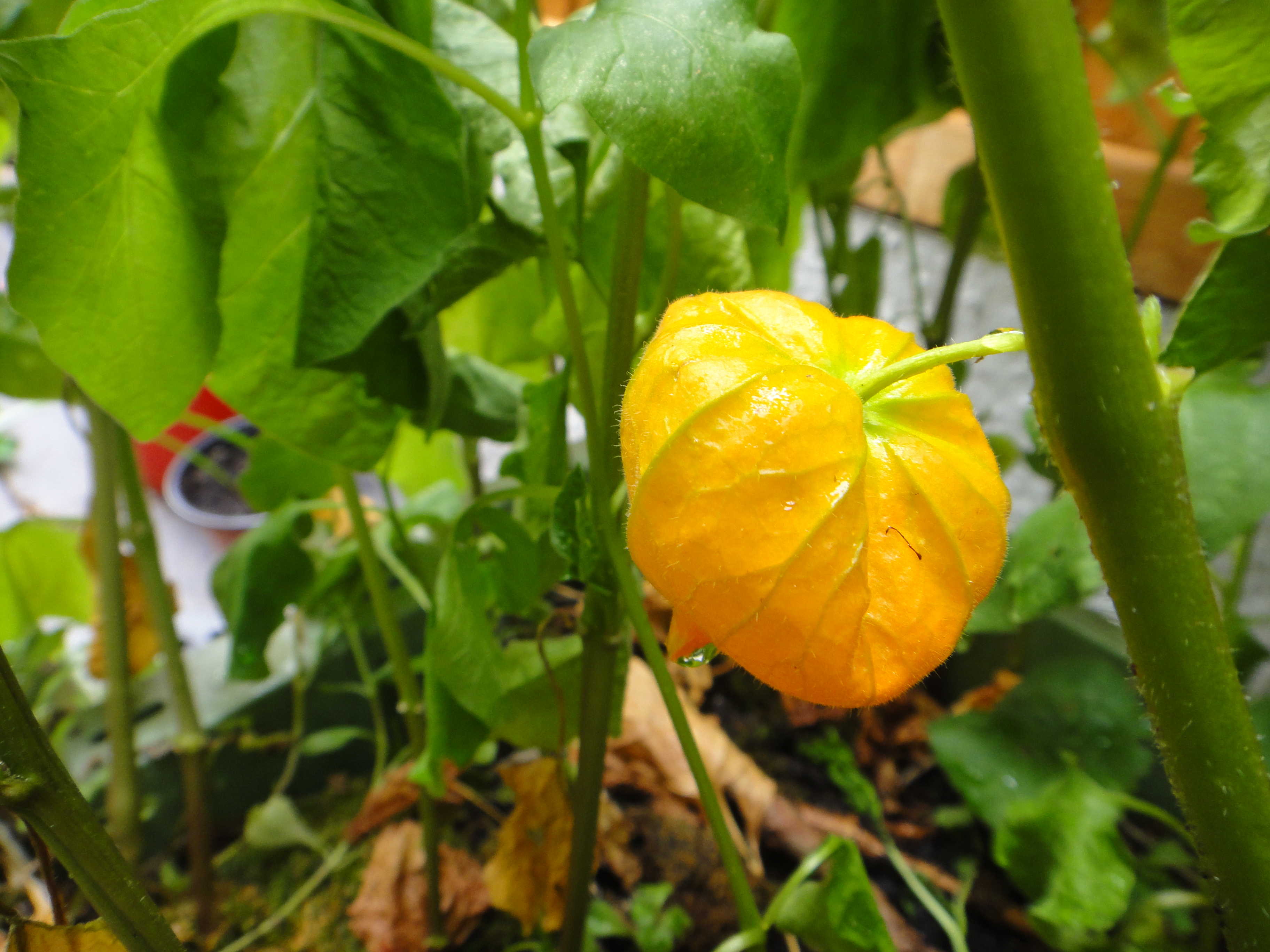 The first signs of colour on the tomatoes! The variety is “Latah”, which claims to be ripe in just sixty days after planting out – as I put these outside just after my birthday (so around 22nd/24th April), they’re pretty much spot on.

A fairly tasty variety, and exceedingly prolific, but even the seed catalogues admit that it’s almost impossible to prevent the plants becoming a “sprawl” … I’d actually say “messy sprawl”, though so far this year I seem to have them not too far out of control. 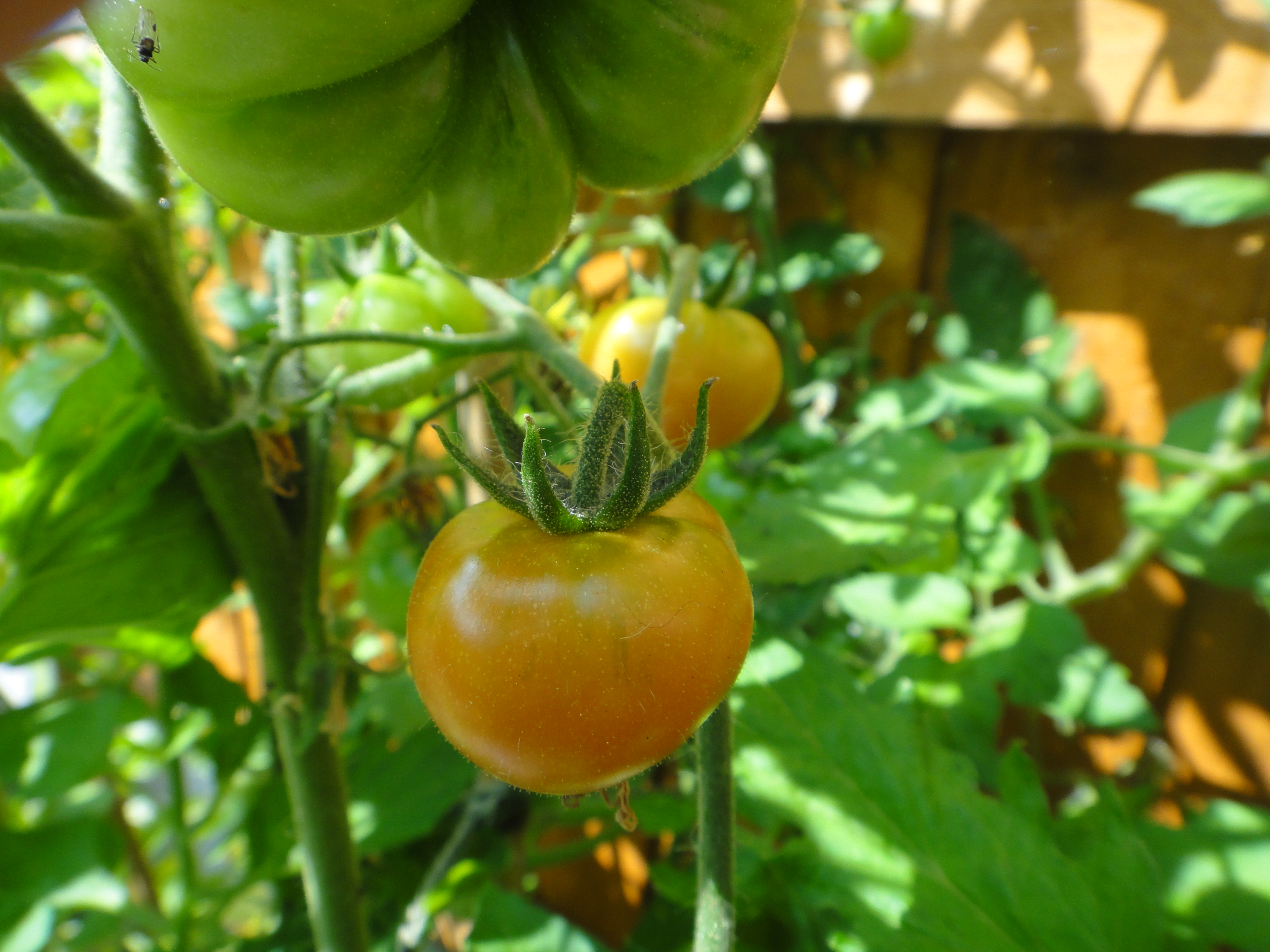 This spring, I sprinkled some seeds of betony on the “wildflower bank” behind my small pond. It seems to have taken well! Betony featured in many mediaeval herbals, and apparently will protect my pond against witchcraft … 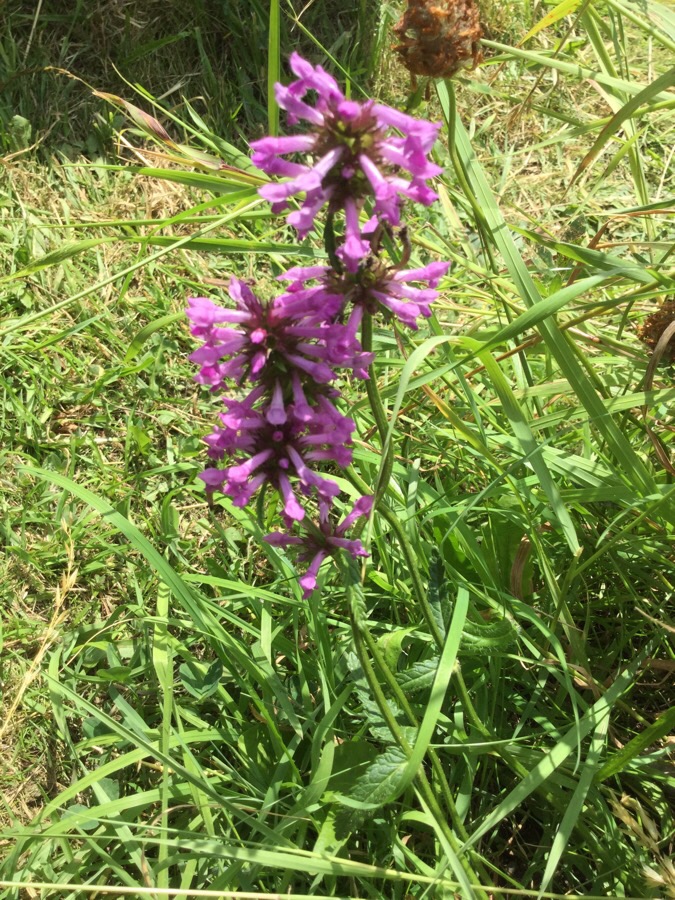 The “Empress of India” I put in as small plants just after I’d put up the rose arch have now started flowering. Well, one flower, anyway. In this fairly dark and somewhat shady bit of garden, it does the job of leaping out like a flame!

Hopefully, nasturtium flowers to include in salads will be not far away. 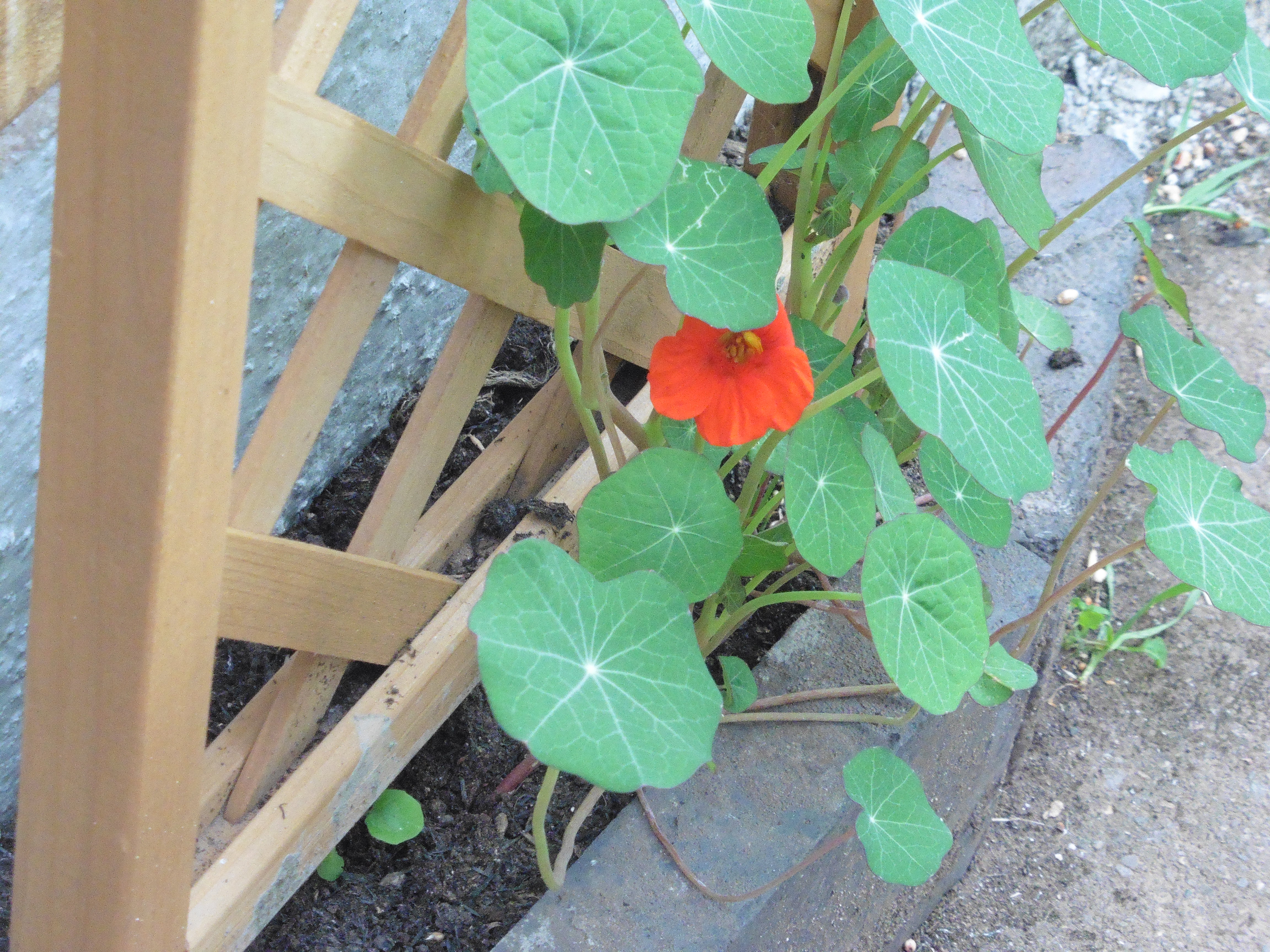 The first signs of the first-ever fig on my Brown Turkey. I’m not expecting it to amount to anything! But I’ve had the plant for two and a half years, so it’s an encouraging sign that it’s finally feeling at home.

Wandflowers (dierama) have started to come out, including an unexpected very pale pink one by the woodshed. All of them are “Blackbird”, which is normally the rather dark purple to other flowers are. 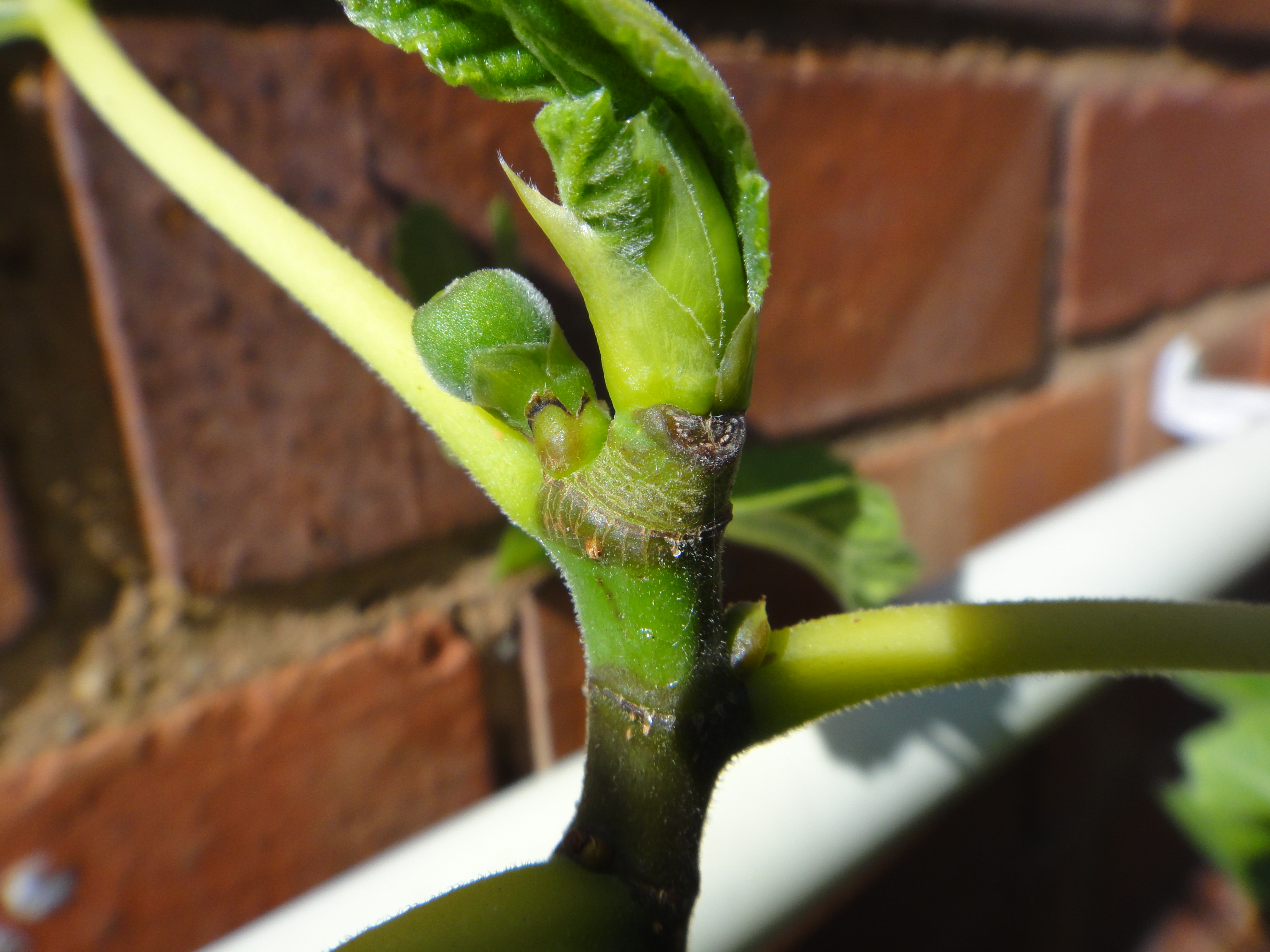 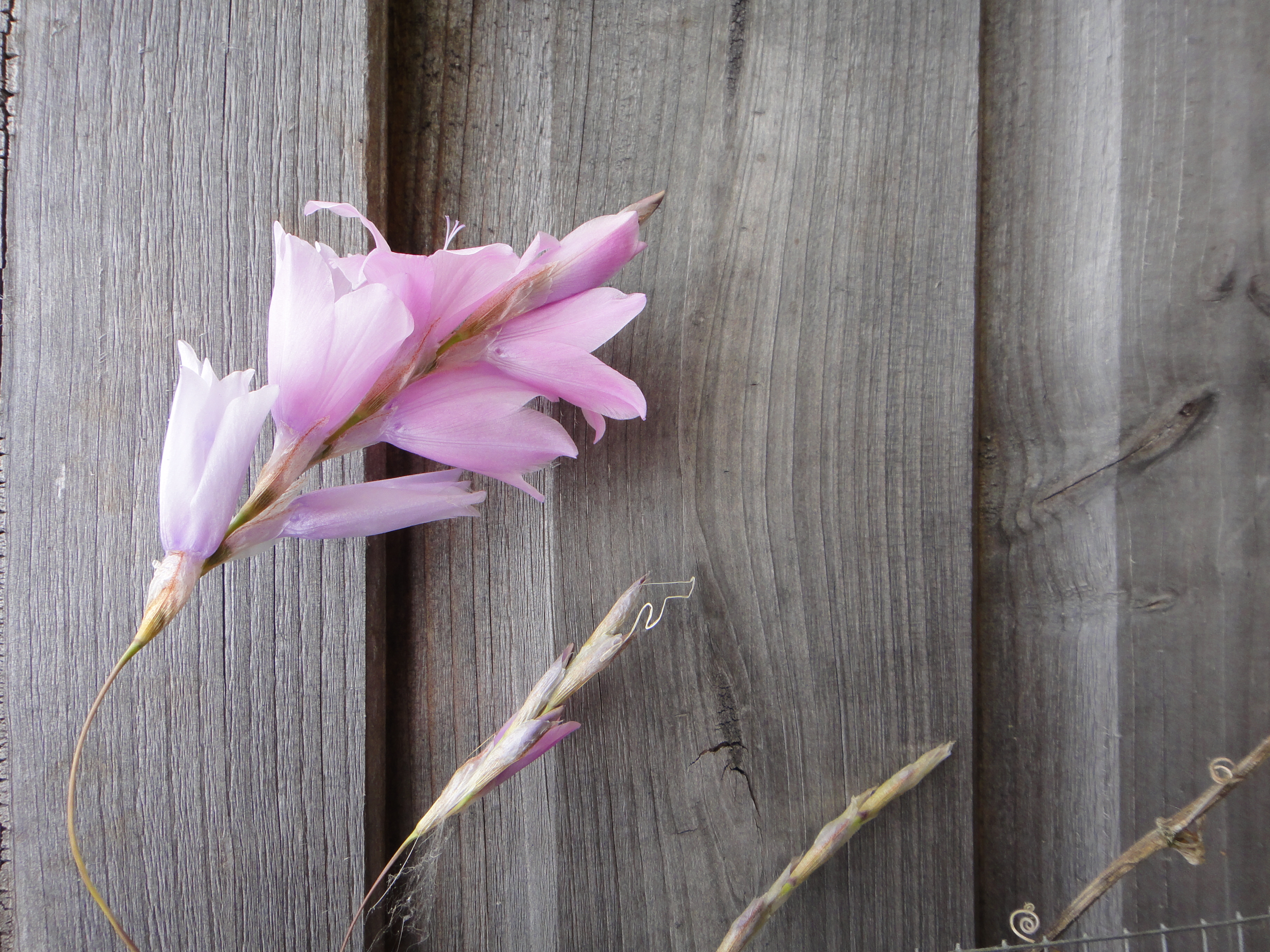 This is what summer evenings are supposed to be like! Eating outside on the patio at just after 9pm (omelette, oven fries, lettuce from the garden). A vast mass of some 40+ swifts performing a complex ariel ballet overhead, pausing only occasionally to scream low over the garden.

Later, there will be raspberries, fresh-picked and still slightly warm from the setting sun on them, with a drizzle of cream.

Last night was the inaugural meeting of the Worcester LGBT+ book group. When the meeting started, it was me and eight women, but Chris & Steve came along after about five minutes, which evened things up a bit. I’d have been a bit nervous sbout being the only man – almost certainly a relic of my student days of being the “token gay” on committees, and more recently being sometimes cast as the “token disabled person”.

Anyway, a very good start, and this group of us is meeting again on 31st, as a trial run, before the first proper meeting on the first Wednesday in September.

In the garden, the flowering rush is now in full bloom. The runner beans are covered in blossom, which bodes well. I’m a bit surprised: last year I had a mix of white-flowered and red-flowered beans, and the saved seed was a mix of white beans and purple beans – but the flowers (so far) this year are all red! I’m aiming eventually to just keep saving seed, hoping to end up with a type that is well-suited to here, as I’ve had disappointing results from some seeds and bought plants, and great results from others.

My saved cosmos seed got eaten by slugs as soon as the plants went out. The bought replacement plants have just come into flower – a pale yellow, as an experiment. I’m not convinced, and think I’ll revert to pink next year. 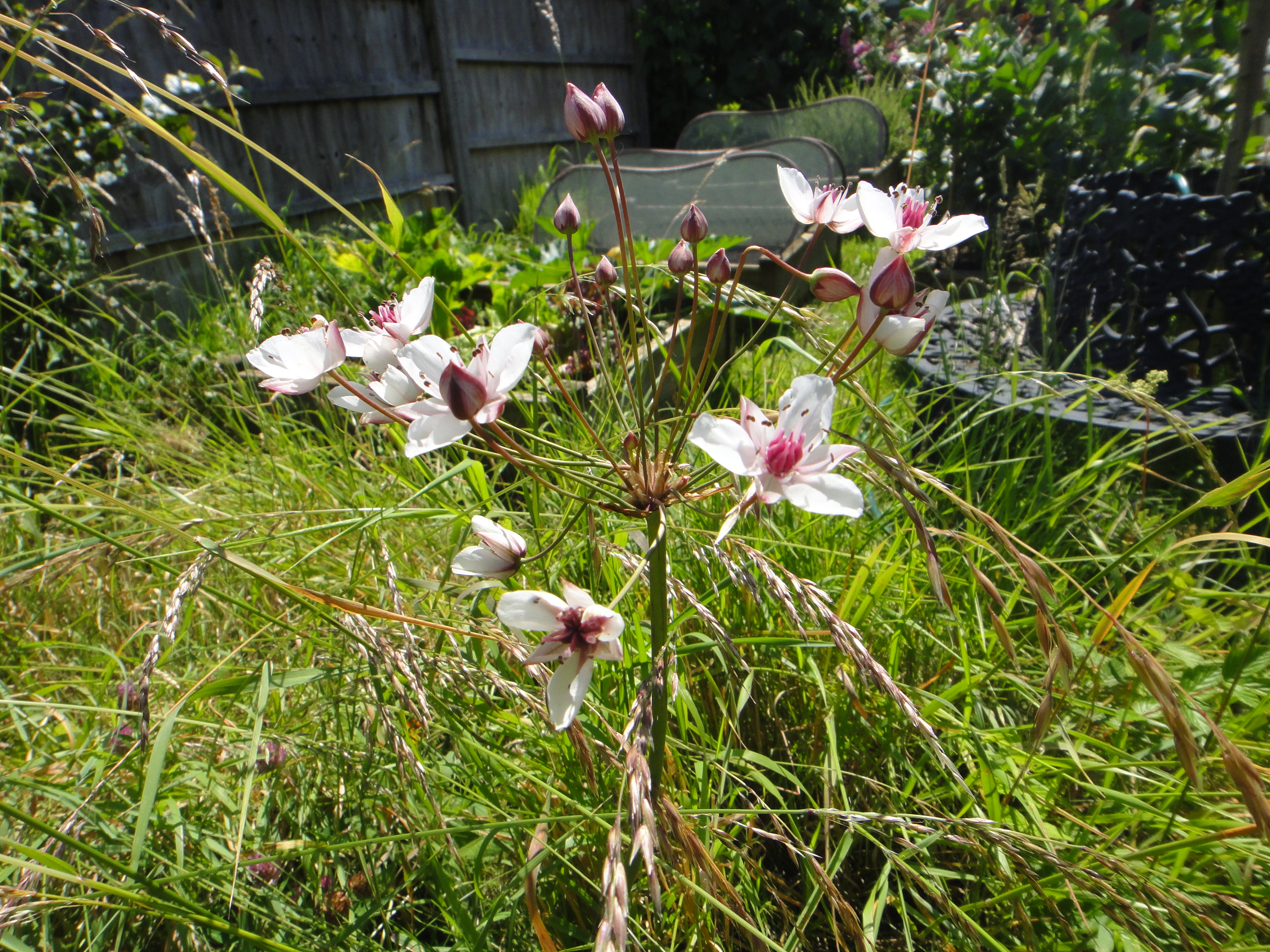 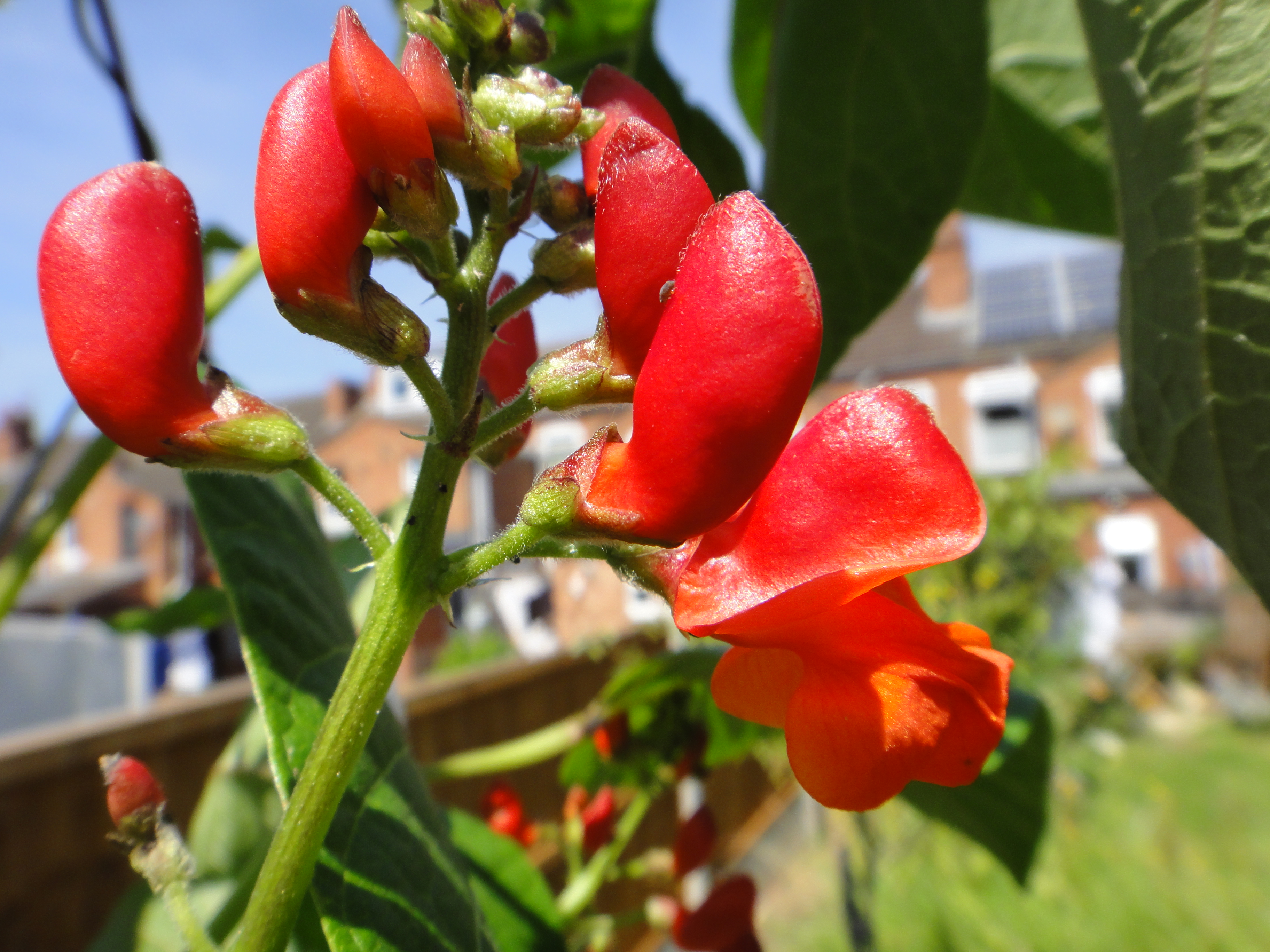 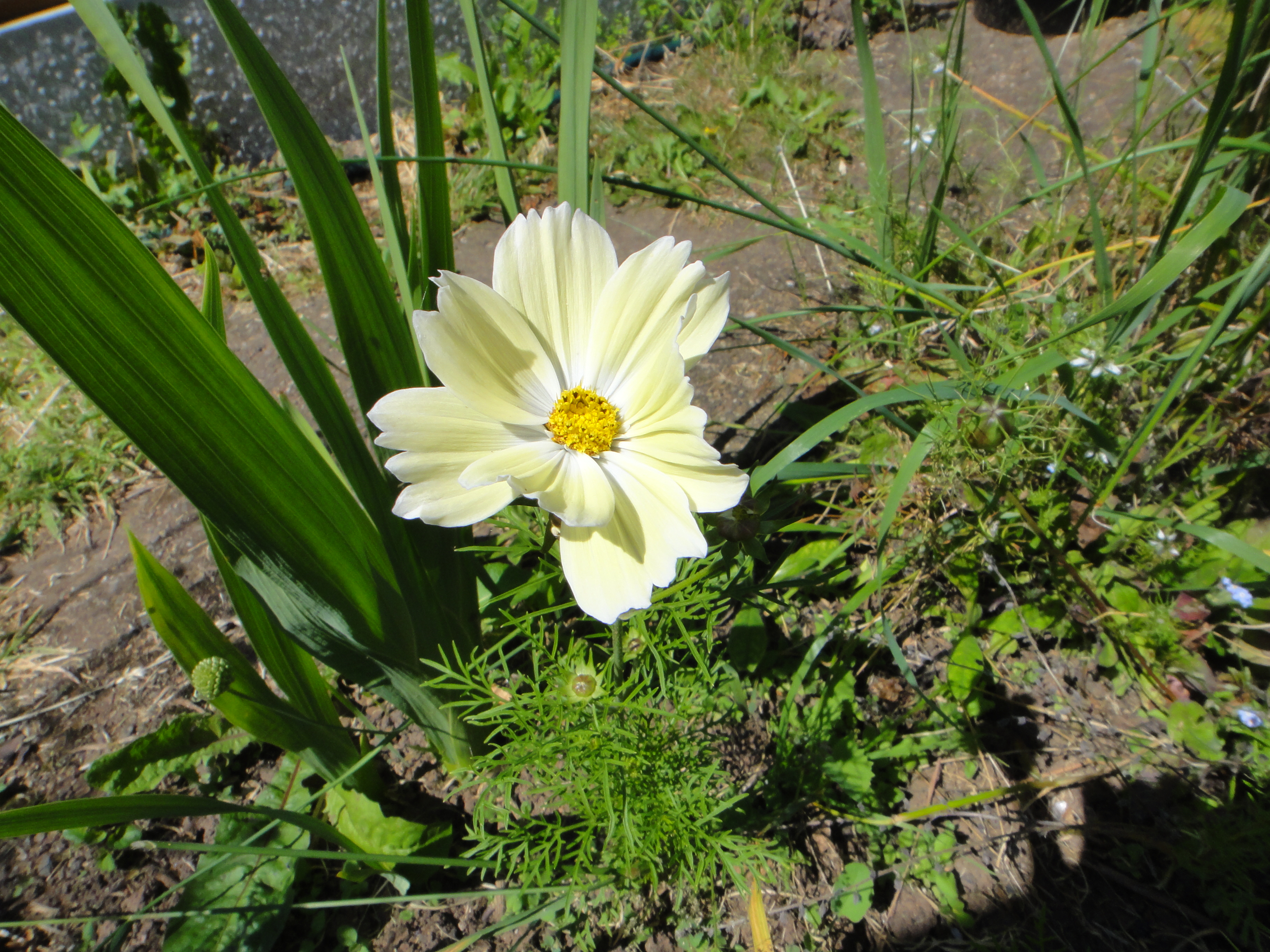 Morning glory just outside the back door is really getting into its stride. A bit further up the garden, the sweet peas are also doing well. 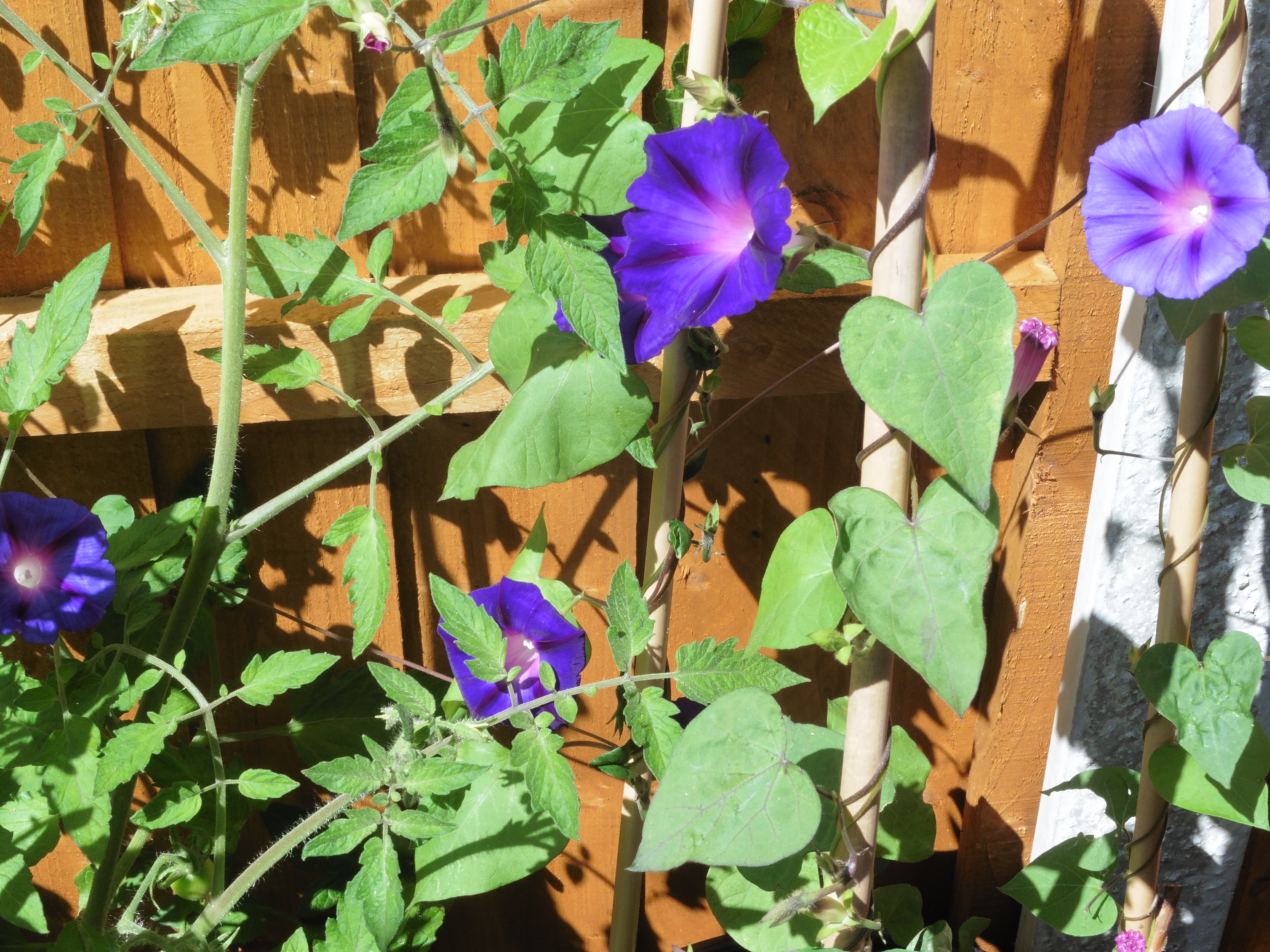 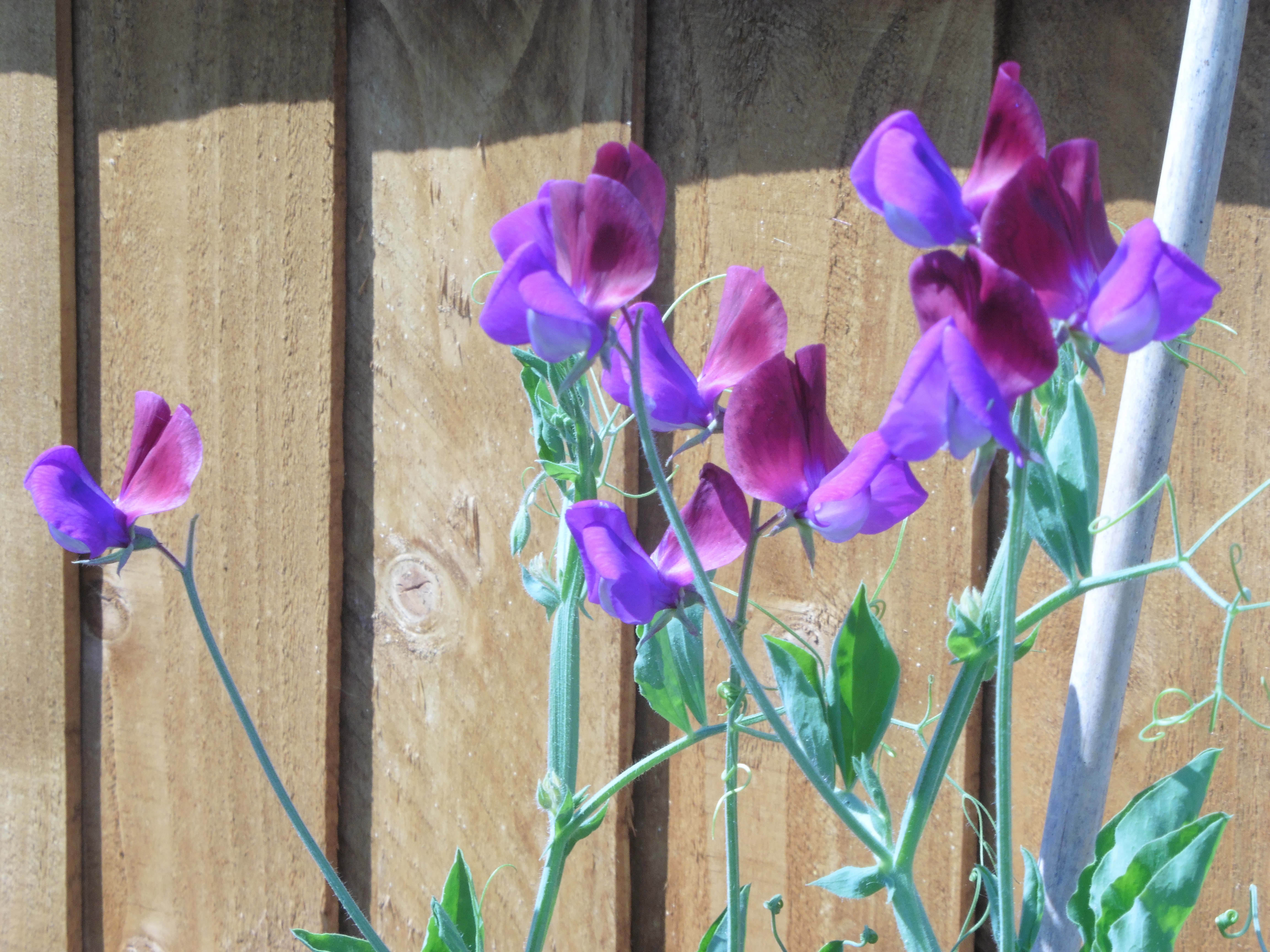 The white irises are coming into bloom in the pond, rising stately above the mimulus. Evening primroses are open, on this overcast afternoon, and alstroemeira has come out and is spilling over the edge of the patio.

In the veg patch, the runner beans have been in flower for a couple of days. The first green courgette has reached a “picking” length of about eight inches, and I might use it for supper tonight. Yellow ones won’t be far behind.

The first truss on the Black Russian tomatoes appears not to have set, but the second truss on one has a couple of fruit forming – the smaller one is about the size of a squash ball. No sign of fruit yet on either of the other varieties, though they’re both supposed to be very early types. Plenty of flower trusses, though, so there’s grounds for hope.