The front room has been unusually warm for the last couple of days. Having taken the thermostat in there to check, it was over 80F (27C).  An investigation of the radiator showed that the head of the TRV had pinged off! On closer examination, the bits of the head supposed to grip the valve body had got embrittled, and clearly shattered. 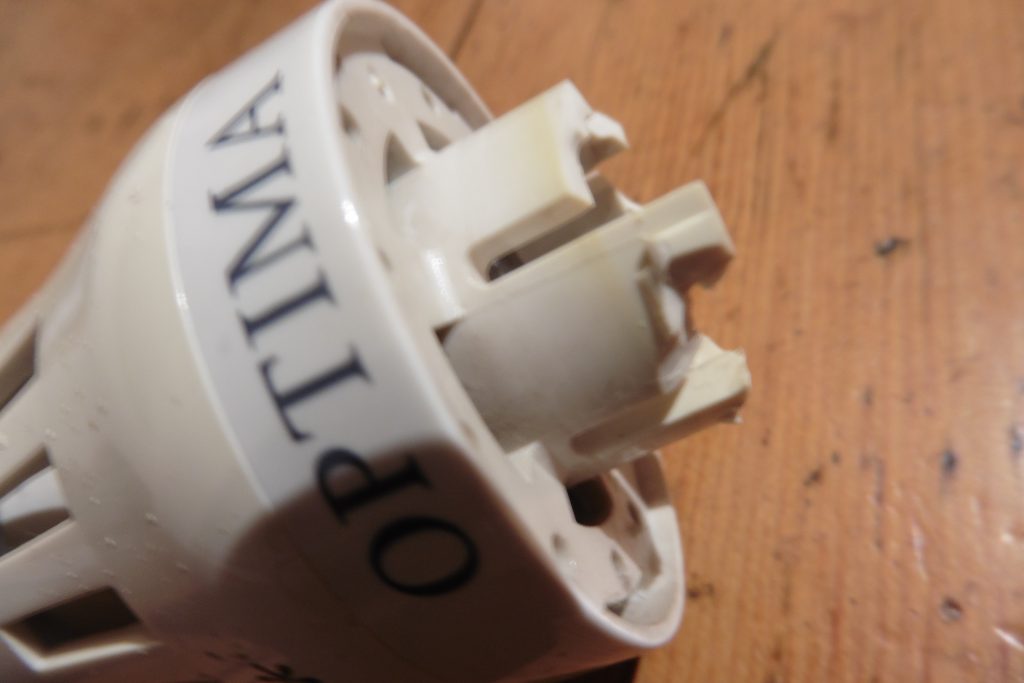 Not a good start, really. However, I discovered replacement valve heads at Toolstation for £9.99 – frustratingly just under the £10 minimum order for free delivery. I bulked it out with a couple of steel straps, to hold back the clematis over the porch at my Mum’s house.

To my astonishment, I had a phone call from the pre-diabetes people early afternoon! They’ve offered me an initial appointment next Tuesday – a really rapid response, considering their website warns of potential delays of up to four weeks! I had already decided to start keeping a food-and-activity log again, like the one I kept for several months last spring – precipitated by the scales hitting 74kg yesterday morning! I’d really like to keep around 70, though somehow 71 seems to be more realistic.

The forsythia brought in on New Year’s day is now fully open, and cheering the place up a bit. 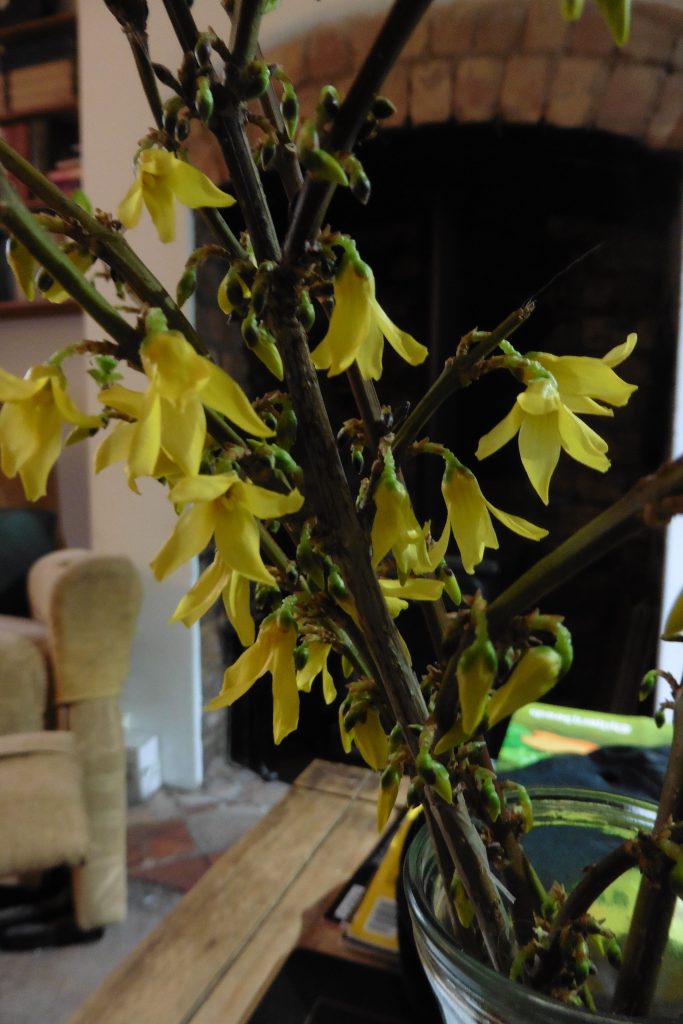 Much needed – I’ve had a really shitty time since getting home on 30th December: a cold, which has settled on my chest and in my sinuses. The result is almost no voice, blurred vision, headaches, and frequent dizzy spells. I had something similar a couple of years ago, which took around six weeks to shake off, and I’m desperately hoping that this resolves itself before then!

I’m due to go to London at the weekend, for a “wake” to celebrate the existence (and impending closure) of OUT – a gay social networking site I’ve been a member of since March 2005. I’ve met a number of good friends – known mainly on line with only the occasional meeting in person – through the site, and enjoyed a lot of stimulating debate on the forums there. I’ll be deeply sorry to see it go, though there’s promise of “an app” called Gmeet, to operate in a similar social space, for which I’ve contributed to the crowdfunder. Launch date is uncertain … possibly March?

I got back from Christmas at my Mum’s at lunchtime on Sunday 29th December with a mild sniffle. On the Monday, I was losing my voice and had a splitting headache. By the Tuesday, New Year’s Eve, it was clear I had a fierce cold, which was settling in my sinuses, and my vision had gone very blurry.

Still very unwell, and I’ve only bothered to get up and dressed to put the bin out  last night for emptying, and today to bring it in again. Tomorrow will have to see an expedition of 200 yards to the Co-Op, as I’m nearly out of blackcurrant lemsip and honey to put in it.

I’m not sure that my GP surgery knows its arse from its elbow at the moment!

I had a DXA scan on Tuesday of last week (12th). The day after, the surgery rang me to arrange a phone consultation for Weds 20th (yesterday) between 0800 and 1000h, which I got up early for as I’m not coherent before the first mug of coffee of the day.

So, GP rang yesterday as arranged, says I have some bone density loss (osteopenia, not osteoporosis), not to worry, see NHS website for advice and I’ve been flagged for a re-scan in 3 three years. A bit casual, but there it goes.

Then this afternoon I get another call from the surgery. The GP wants to see me, about the results of the scan. I said we’d already had a phone consultation about it, but apparently things have changed! So now I’m booked in for an appointment on 4th December …

Oh well, I’m off to the “patients’ participation group” meeting there tomorrow (my first one), to give feedback from the patient perspective …

Really dodgy wrists and hands – doctor on Monday said “splint and complete rest”, plus new painkillers. Splints arrive tomorrow (I hope), so lots of garden chores done today so that a complete rest for a couple of weeks will be possible!

Pond pump jammed solid this morning, for the 5th time this year. As usual, it was a horde of baby water snails that had got through the filter … maybe they squeeze in as eggs, as I can’t see how else they’d get in. Lovely damselflies flitting about me as I wrestled with the pump – this one’s on a mimulus leaf. 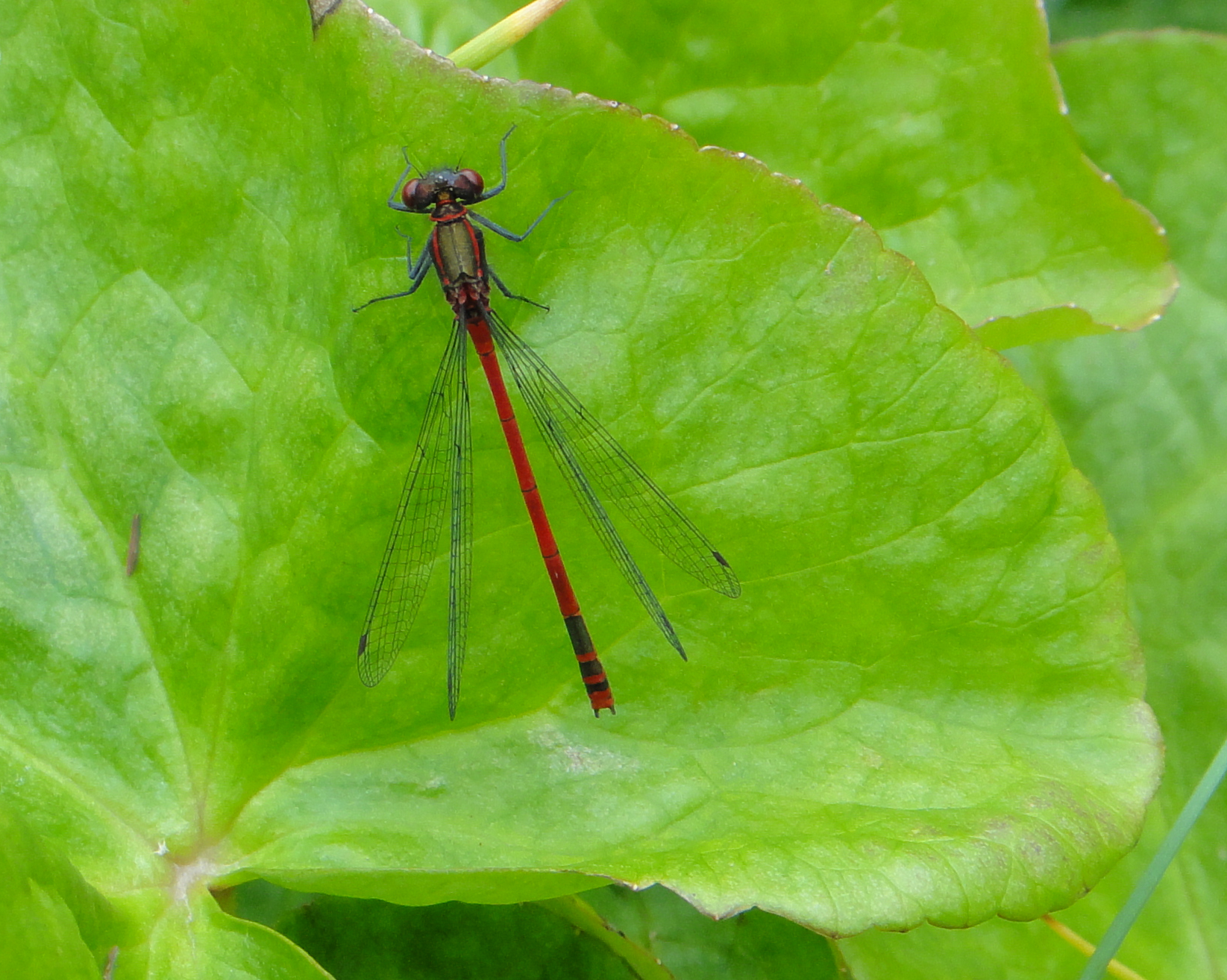 Then the pruning of the ceanothus. Over 60% (by bulk) of it cut off, now it’s finished flowering, and height down from 7 foot to about 5 foot. It’s allowed the acanthus (“Bear’s Breeches”) to show up, anyway: they’d been screened by ceanothus boughs (pruned ceanothus on the right). 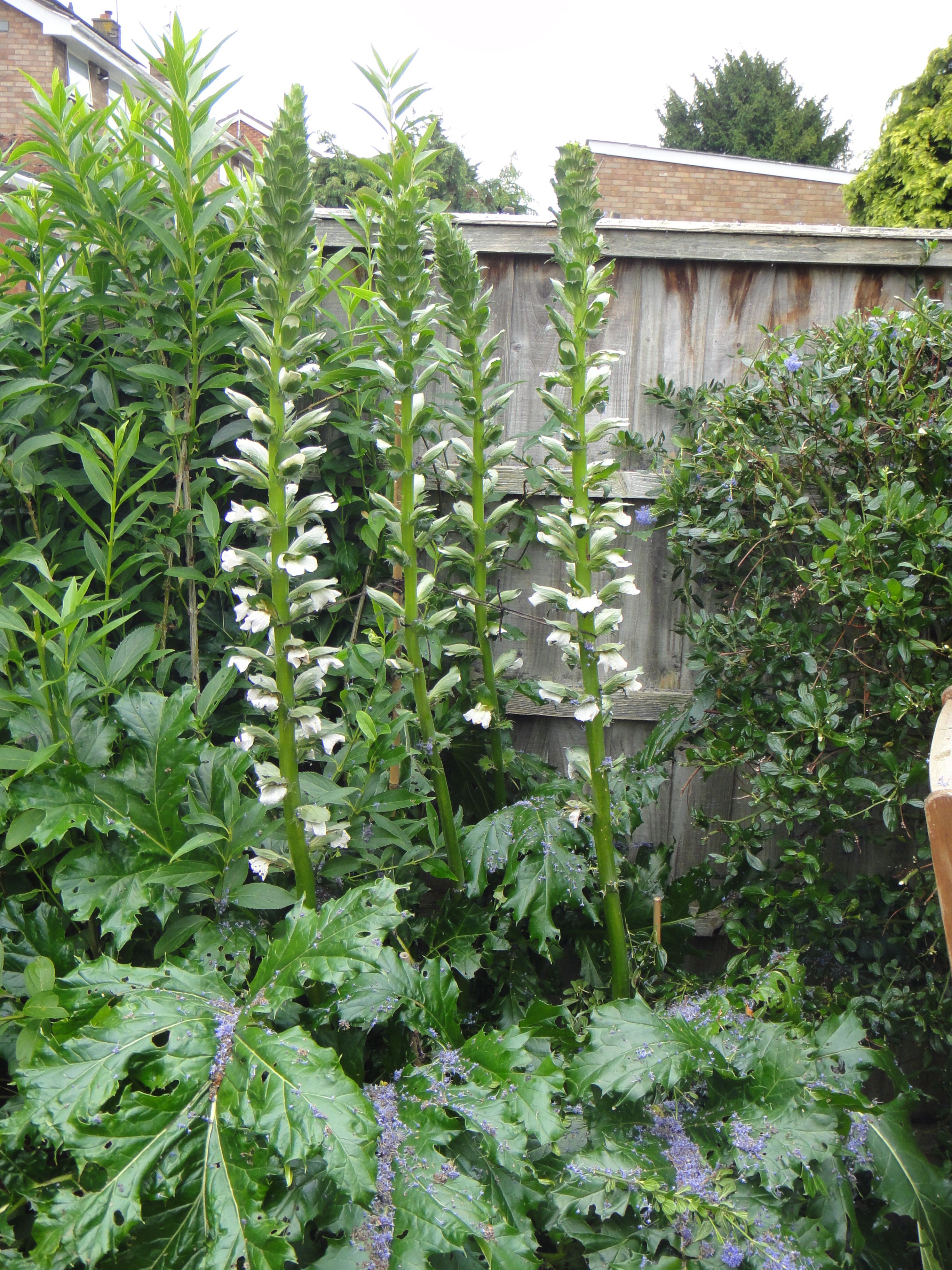 The lawn – unmown for nearly a month due to dampness – is a decorative mix of red clover and daisies. 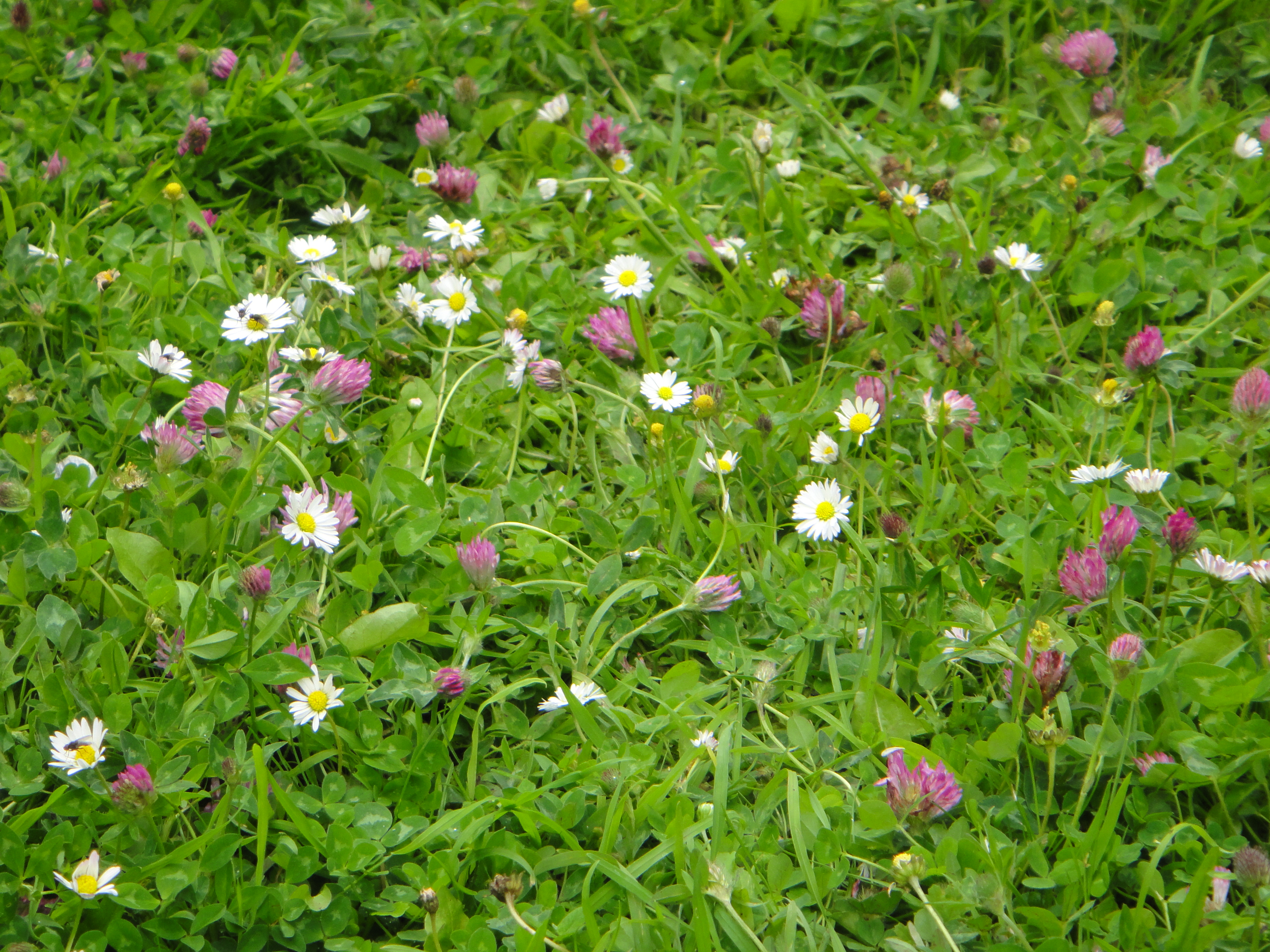 The very first sweet pea flowers are open, with a glorious scent. I very much like this colour, as well, so I’ll try to save seeds from this to see if it comes true. 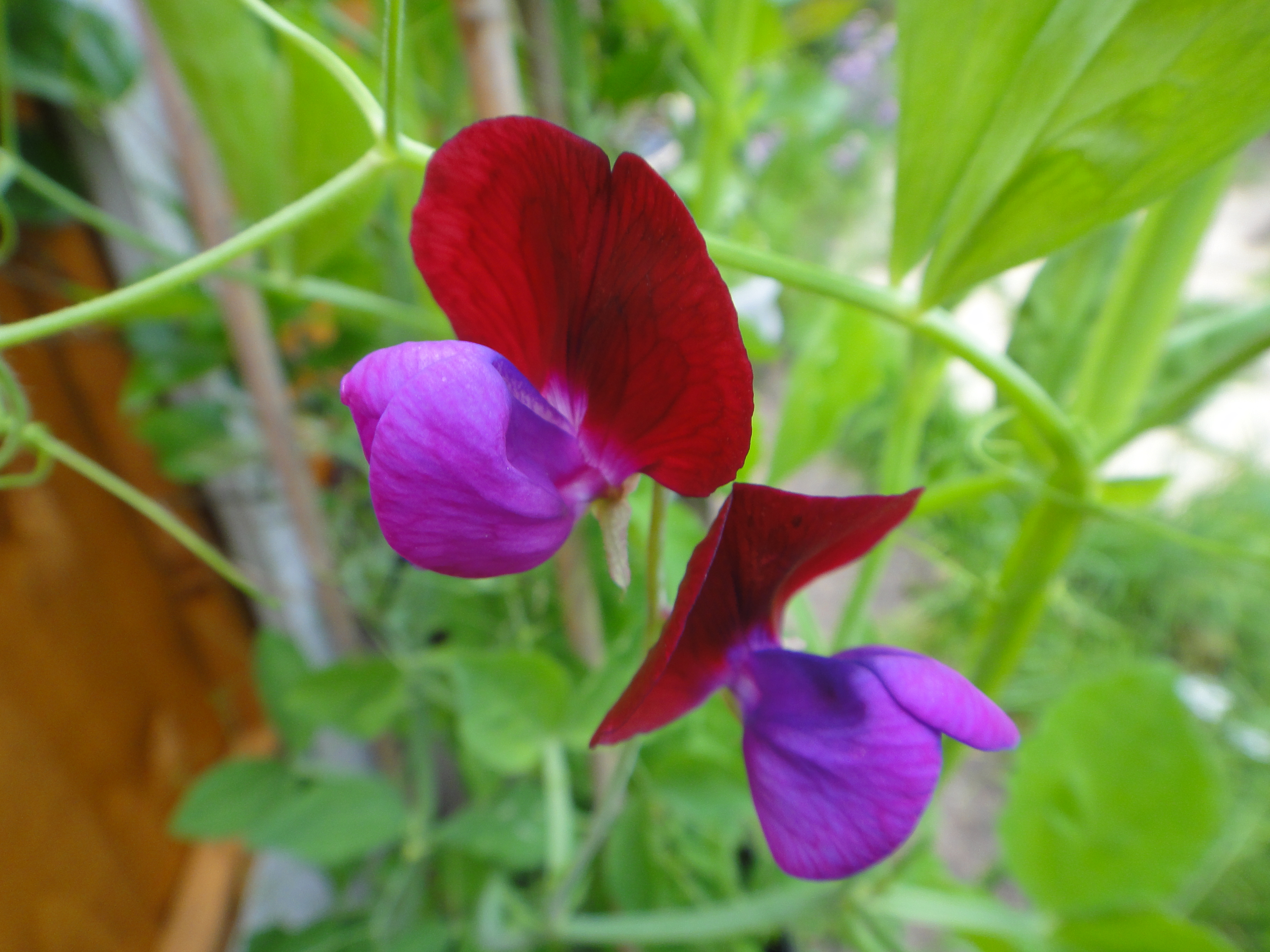 Stabbing pains in the left-hand side of my chest started just before 11. I took a couple of doses of GTN spray, but things only moderated slightly, so I rang NHS 111. After talking me through their script, they called an ambulance. The paramedics arrived, did an ECG (which they said was fairly normal) and suchlike, but decided I’d better go to A&E anyway. No blue lights, however!

A&E at Worcester Royal has marginally improved since my last trip there about three years ago. Patients are still stacked on trolleys in the corridor, but there’s now an official ambulance reception office with a counter on to the corridor, and a couple of curtained off areas  to examine patients in!

Fortunately, it turned out merely to be a rather atypical angina attack, and not the heart attack at first suspected. But a bit scary to start with, and then very tedious lying on a trolley for the best part of seven hours. However, I was fed jelly and ice cream at half past four (preceded by a cheese sandwich), before being discharged around six.

A cab home of course – no way could I face waiting for the bus, changing at Lowesmoor, and waiting for another bus (and #35’s get very scare after  6pm). I rang Mum just after nine, as I’d been due at Green Mount tomorrow, but have been advised to take it easy for a couple of days. Difficult not to worry her, but I’ve briefed Sim so hopefully he can be a calming influence if necessary. Visit to GM now due for Saturday.

The family curse of rotten teeth! £90 to the dentist a couple of weeks ago, £190 today, with a further £500-ish next Tuesday, and a further sum tbc next Thursday. Plus a couple of days of living on soup, while my top partial denture is sent away to have stuff added to it to compensate for the teeth (and therefore bridge) being extracted.

Hopefuly, back in working order for Christmas.

Having been at my Mum’s for a couple of days really brings home to me just how much difference the very small changes and adaptations I’ve done at my own home do actually make!

An adjustable chair to support my back. Eye-level grill. Fridge in top half of fridge/freezer, not bottom. Dryer for when carrying/pegging out wet washing to line dry is a bit much. Heavy furniture in arms reach to grab if I go a bit wobbly, so I don’t need a walking-stick indoors. vegetable waste on worktop not at floor level. And so on … All small things which turn out to add up to a really important difference.

Currently lying flat on my back on the bed, waiting for strong painkillers to take effect. At the moment, it feels as though I’m lying on a sack full of hamsters! Lots of muscles twitching and moving, which don’t seem part of me … Meds usually sort it out in an hour or so.

Buggered up my back when stuck on a delayed train coming home from my Mum’s on Saturday, and it’s been getting worse. Simply can’t take the increasing pain any more, and have grabbed the emergency Tramadol. Sorry if Facebook etc posts for the rest of the day seem (more than usually) confused or incoherent. 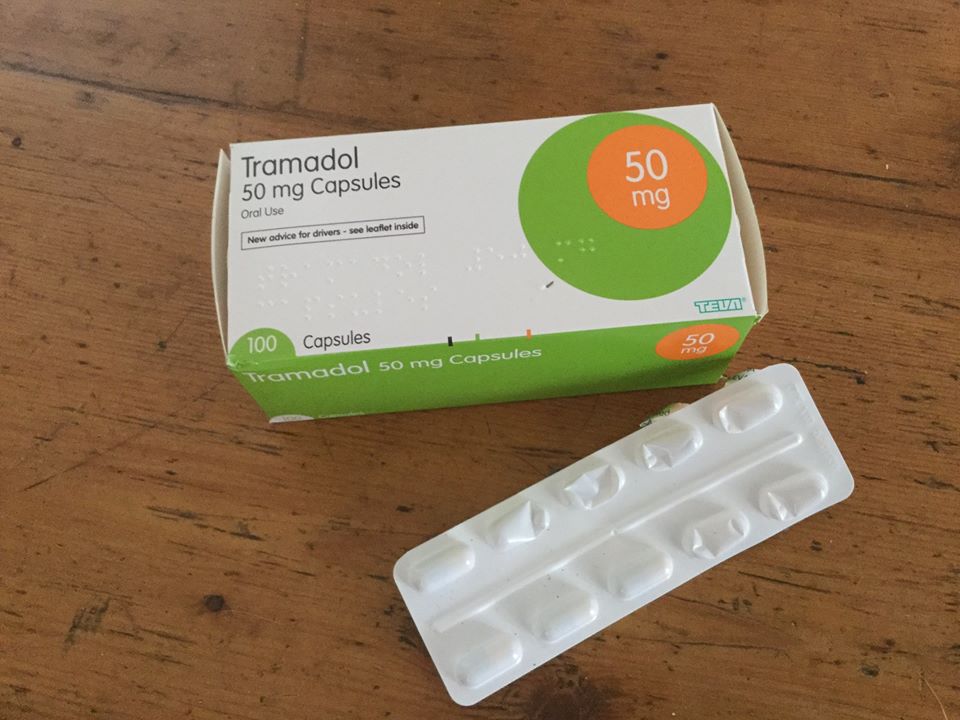