On Wednesday night I did not stand for re-election as Chair of Worcester Green Party. After two interesting, occasionally fraught, and on-the-whole successful years the Party has grown to a point where I felt it would benefit for someone new in post – congratulations to Heather McNeillis.

I’ll continue to house the Risograph and print newsletters (for Worcester and other Green Party groups), and have been elected as Deputy Chair (just as occasional support for the Chair if needed).

For the past week, I’ve been counting the plastic items I throw out, as part of the GreenPeace “Big Plastic Count”. I’m fairly pleased with the result. What’s interesting is that the great majority of the plastic I chuck is in the form of cat-food pouches – 23 items in a week.

Sadly, Chelsea-cat refuses to eat any other kind of catfood – and when she does rely on the perpetual cat-feeder full of dry food, she gets badly affected and her back legs stop working properly (which I think is a diabetes issue).

Anyway, my results: 34 pieces of plastic chucked in a week in total, of which I noted 23 were cat-food. 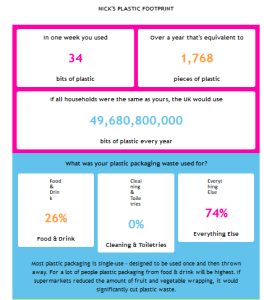 A facebook post by Worcester Green Party from a couple of days ago. And Courgette! Well, nearly … it’s about half the size of a matchstick at the moment. I was taken by surprise, as previous courgettes I’ve grown have had a couple of weeks of male (non-courgette-bearing) flowerbuds before there’s any sign of the female (courgette-bearing) ones, but there’s no mistaking this. The variety is “Soleil”, a yellow bush variety that I haven’t grown before. 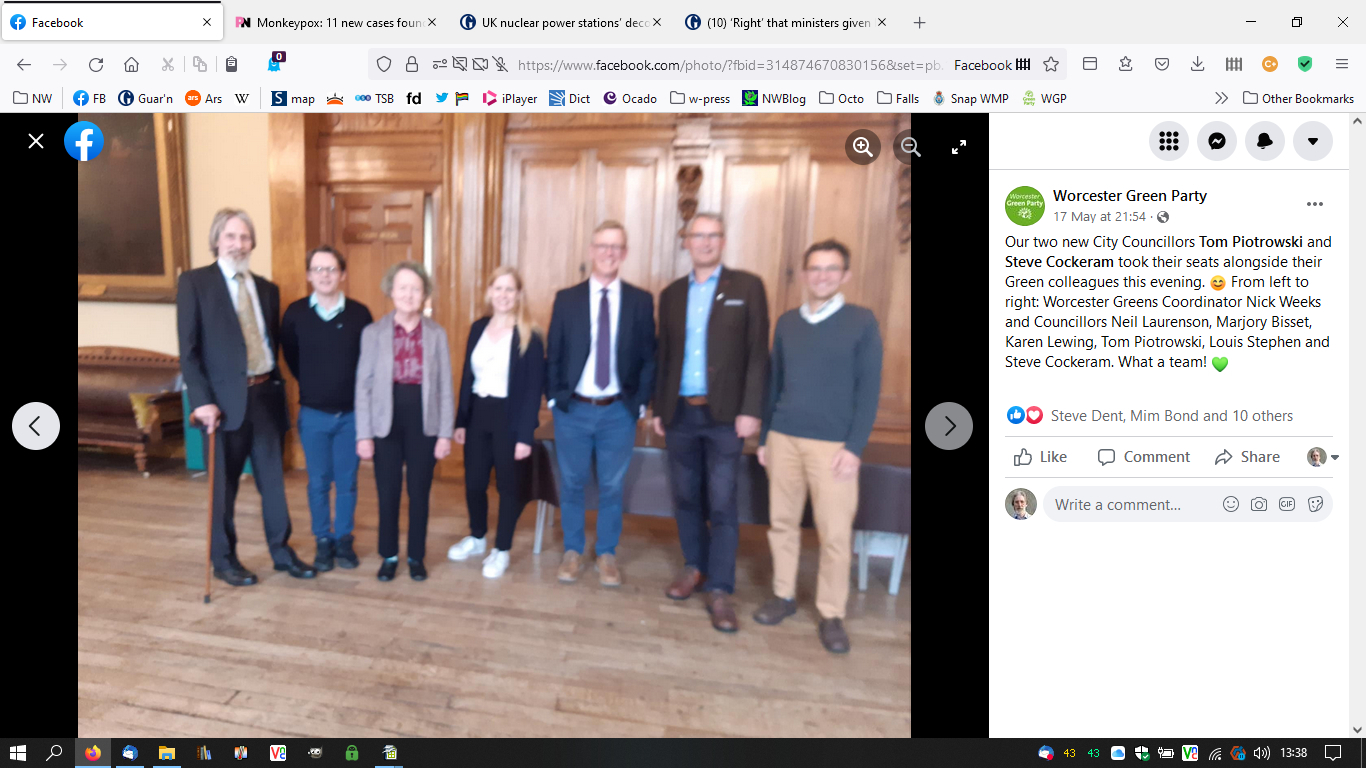 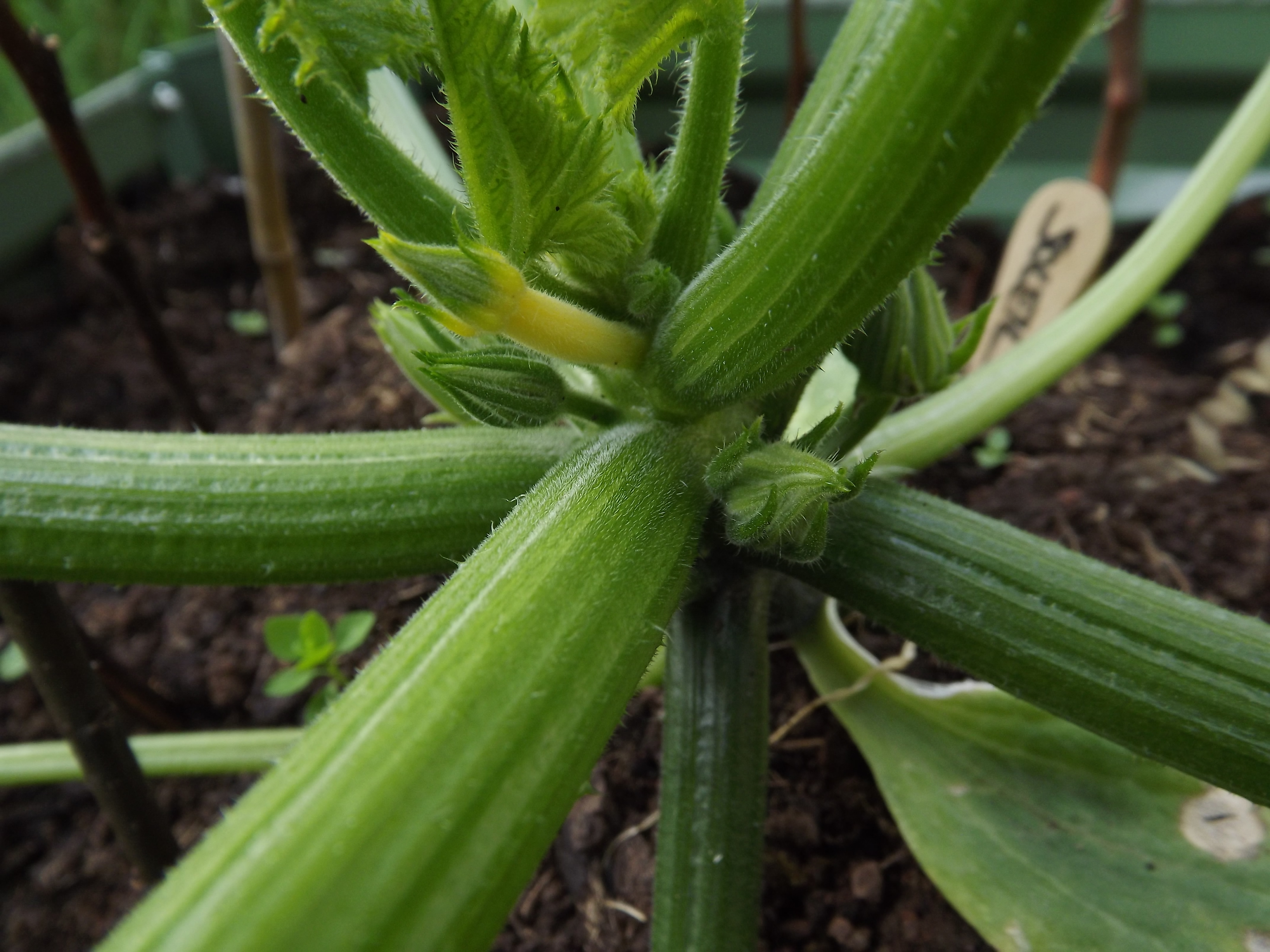 An old friend – Mark Lovell – commented on one of my Facebook posts to ask if it had been me on BBC news at Ten last night. Obviously, not an interview, but I thought it possible I’d appeared in the background somewhere. And then I had an email from my brother, asking the same thing. So I pulled up iPlayer to check.

In fact, an excellent night for us across England.

Dolls out of prams – ” Our team in Worcester reports Tory leader has gone home, expects party to lose several seats says ‘people have given their verdict on govt’, partygate was a big issue, and MPs need to think about who they want to lead them into next election. — Laura Kuenssberg (@bbclaurak) May 5, 2022″

We’ve won two of our three target wards here in Worcester, which is very good news. Tory voters seem to have stayed home en masse, rather than defecting to LibDems. Full results at https://www.worcester.gov.uk/cou…/elections/2022-elections – and I’m delighted that I very convincingly beat the LibDems to come 3rd in Rainbow Hill. 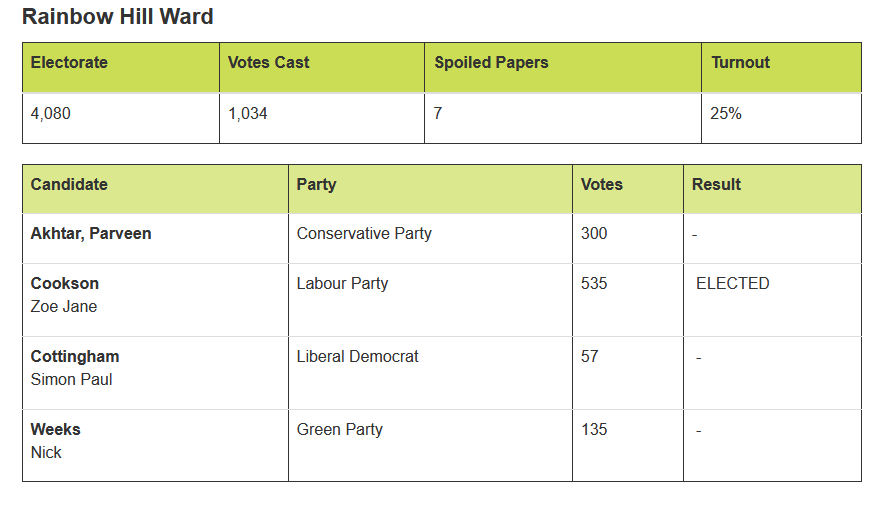 My old “Green Party” facemask had got tatty after many months, so I ordered a new one., which arrived today. A cold grey morning and I’m still feeling like shit – but life was considerably brightened by this note on the invoice! 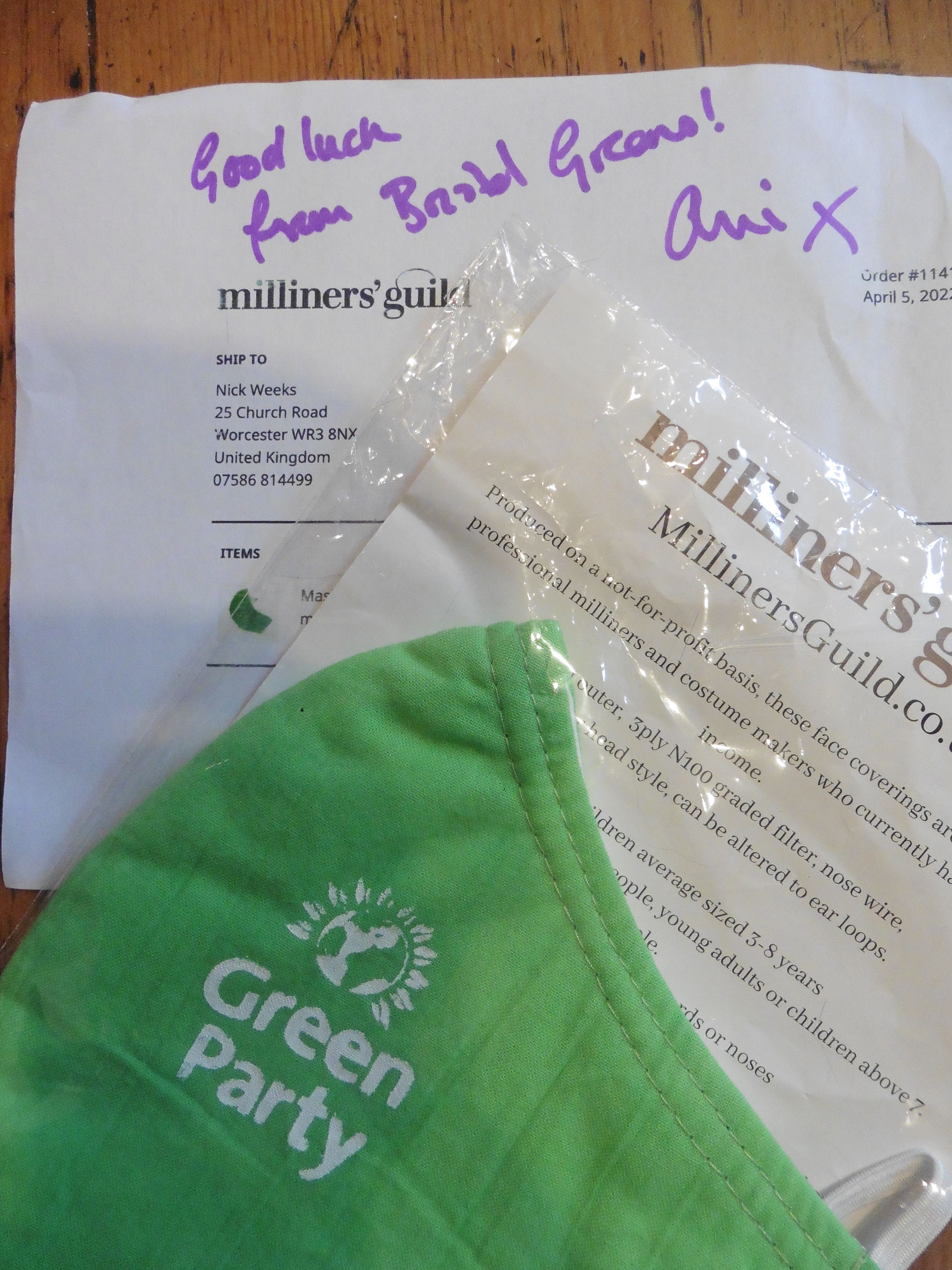 RANT !
I’ve had quite enough of all the posts about how to save energy! Yes, we all need to do it. Very many of us have been doing so for a number of years, whether because of poverty or because of environmental concerns (or a mix). But I’m now feeling that a large proportion of such posts are in fact “blame-shifting” – they’re attempting to suggest that it’s our fault if we’re in fuel poverty, because we’re somehow not being sensible about minimising our energy use.
BOLLOCKS!
Yes, what individuals do has an effect, but overall it’s only small. What is needed (as with environmental pollution, plastics use, recycling …) is system change at local, national and international level. For energy use, that means investment in home insulation, heat pumps, solar panels, waste heat recovery and storage, and a whole lot more!
Do NOT let this government delude people who are doing their best into feeling guilty (unless you voted for them, I suppose). And, if you have local elections coming up in May, voting green might be good. 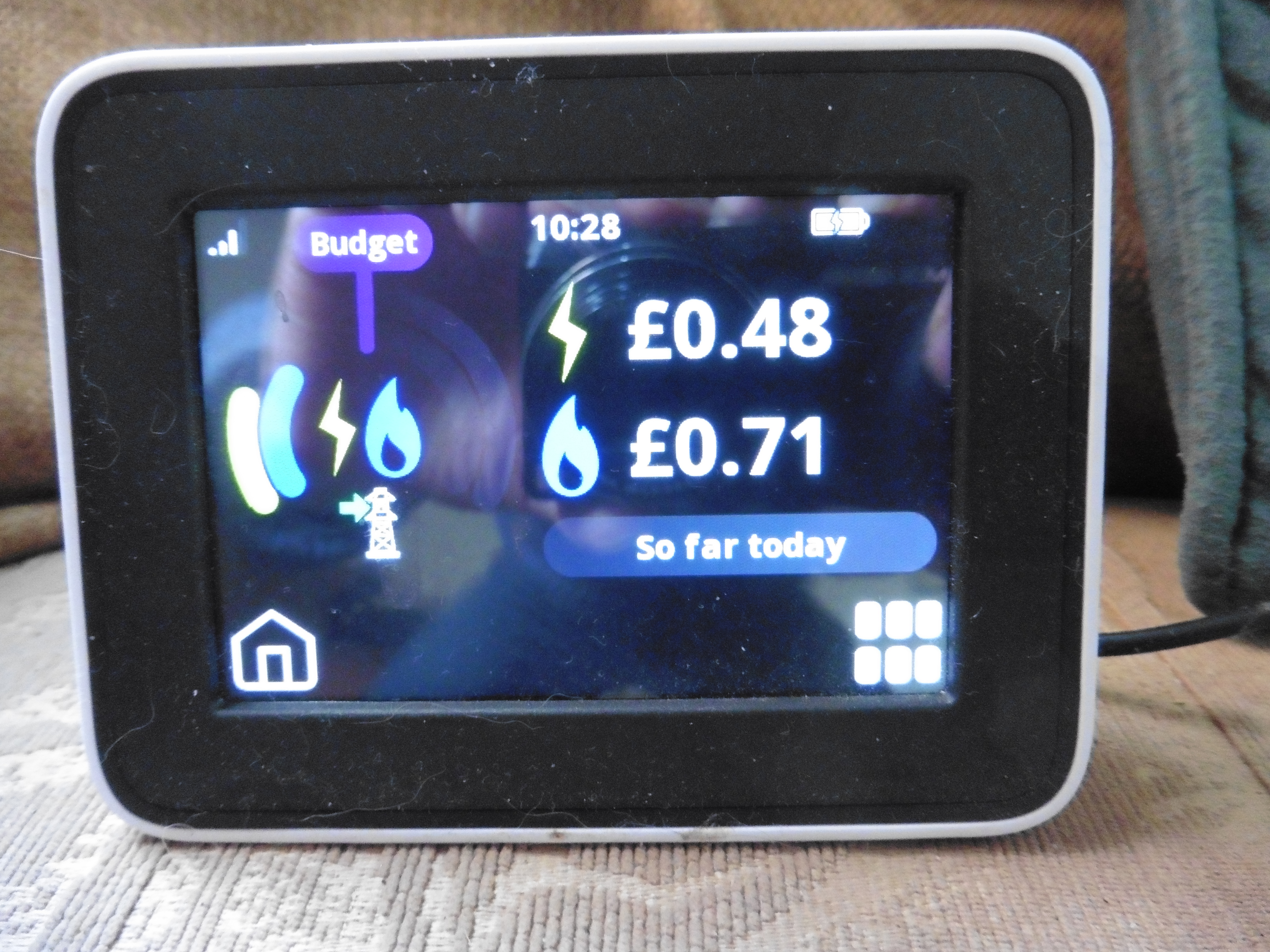 I don’t even expect to come second. Possibly not even third, though there’s a chance.

Nevertheless, I’m standing for election to the City Council as a Green – which I last did nine years ago (others have stood in this ward in the interim). Confirmation that I’m a validly-nominated candidate arrived this afternoon. My “campaigning” is limited to a couple of posters in my front window!

Why? Well, our local constitution says that we’ll fight every election. But more than that, it keeps us in peoples’ minds as a serious political party locally. We currently have four city Councillors (out of 35), and are hoping that we’ll get at least another couple, in wards we’ve been putting energy, expenditure and expertise into. The Green Party national co-leader visited those wards this afternoon.

I’m rather hoping that I don’t get “volunteered” to stand outside a polling station at 7am – Worcester has decided that last year’s covid precautions are no longer needed and the count will be immediately after polls close at 10pm, and they usually go on until about 3am. 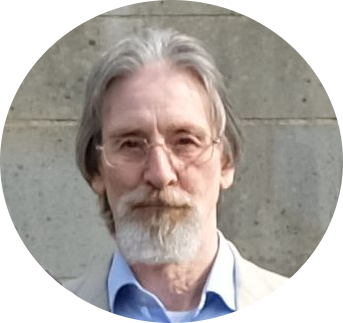 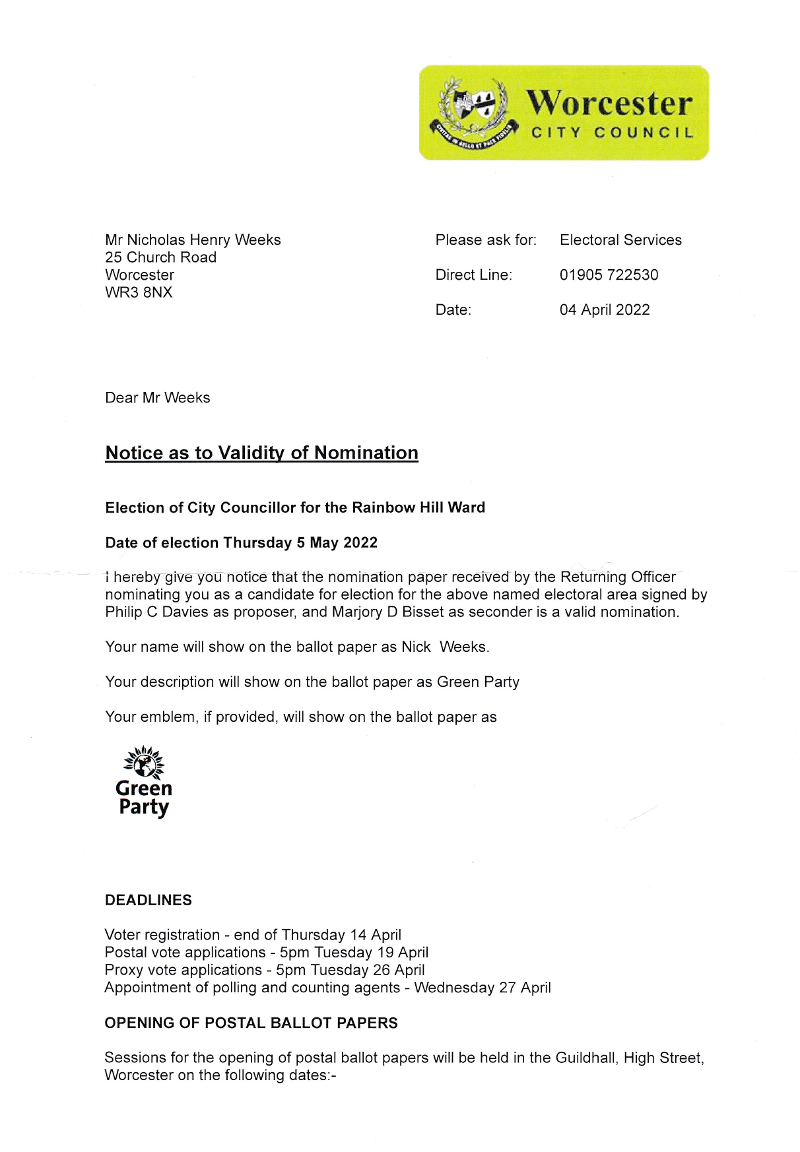 There’s an email group for a couple of dozen of us who were all at school together. It’s been very active over the last 18 months of lockdown and covid-related problems – up from a couple of hundred emails a month to over a couple of thousand, though as lockdowns are released it’s tailibg off again.

This morning, one of my schoolmates (AWK) posted “I’d love to hear what ‘forward-looking’ ideas others have (if any), on a personal, social, maybe global basis”

My response is below. It’s very much a snapshot of how I feel right now, rather than any kind of more general reflection!

“On a personal level, some time ago I came to terms with the fact that my life has reached the “gently winding down” phase. The house I live in was chosen partly because it will be easy to adapt as I get older and more disabled (stairlift keeps being postponed, but will eventually become inevitable, downstairs loo, and so on). I have a garden just large enough to grow a few veg and assorted flowers, which affords me enormous satisfaction and occasional frustration. I’m happy living on my own, and don’t expect to enter another relationship – but if one turns up I wouldn’t object (my Mum got her last boyfriend in her late 60s, a relationship that lasted over 20 years until he died last year, so I suppose it’s not impossible). I pretty much expect to carry on gently declining for the next few years, and don’t really think that I’ve got more than seven or eight years left. But I’m content -even happy – in my present situation.

Socially and globally, I try not to despair. There are causes I fight for, though I don’t expect to “win” in my lifetime. I’ll settle for averting the worst possible outcomes rather than achieving the best! Now that “gay rights” here in the UK has progressed from illegality to broad acceptance over a mere half-century, my efforts – such as they are – have largely switched to climate change issues, and the “social justice” that I think will be a necessary accompaniment. As always, I’m a more behind-the-scenes type than a figurehead, but I have allowed my arm to be twisted to Chair the local Green Party branch. Individual action is all very well (though it often has the side-effect of making the individual horribly self-righteous: there’s a fine line between leading-by-example and being a pestersome bore). What’s needed though, is systemic change,and there are the odd signs of some progress being made, even discounting the flood of “greenwash” and deliberate disinformation put out by vested interests.

The political and humanitarian problems of climate change (desertification and water shortage leading to mass starvation, social unrest and population migration) are becoming apparent, and are things for which I have no answer – I’m afraid that I’ve taken an ostrich attitude as a result.”

Well, I’d said at Business Meeting last month that I’d had a number of physical and mental health problems for much of the year, and would be happy not to stand for re-election if anyone else was willing to put themselves up for election. There haven’t been any takers … and a couple of people have kindly expressed the view that I’ve done a good job anyway, and they’d like to see me continue.

So, Annual General Meeting last night, and I was elected with 100% of the votes (ie no-one voted to re-open nominations!). So I’m Chair of Worcester Green Party again.