I’ve had this “amaryllis” since my first Christmas here, so it’s its seventh year. I was worried that it might decide not to blossom, as it put a lot of energy into making a baby (offset) bulb, which I took off and potted on last summer. However, two flower spikes are coming. 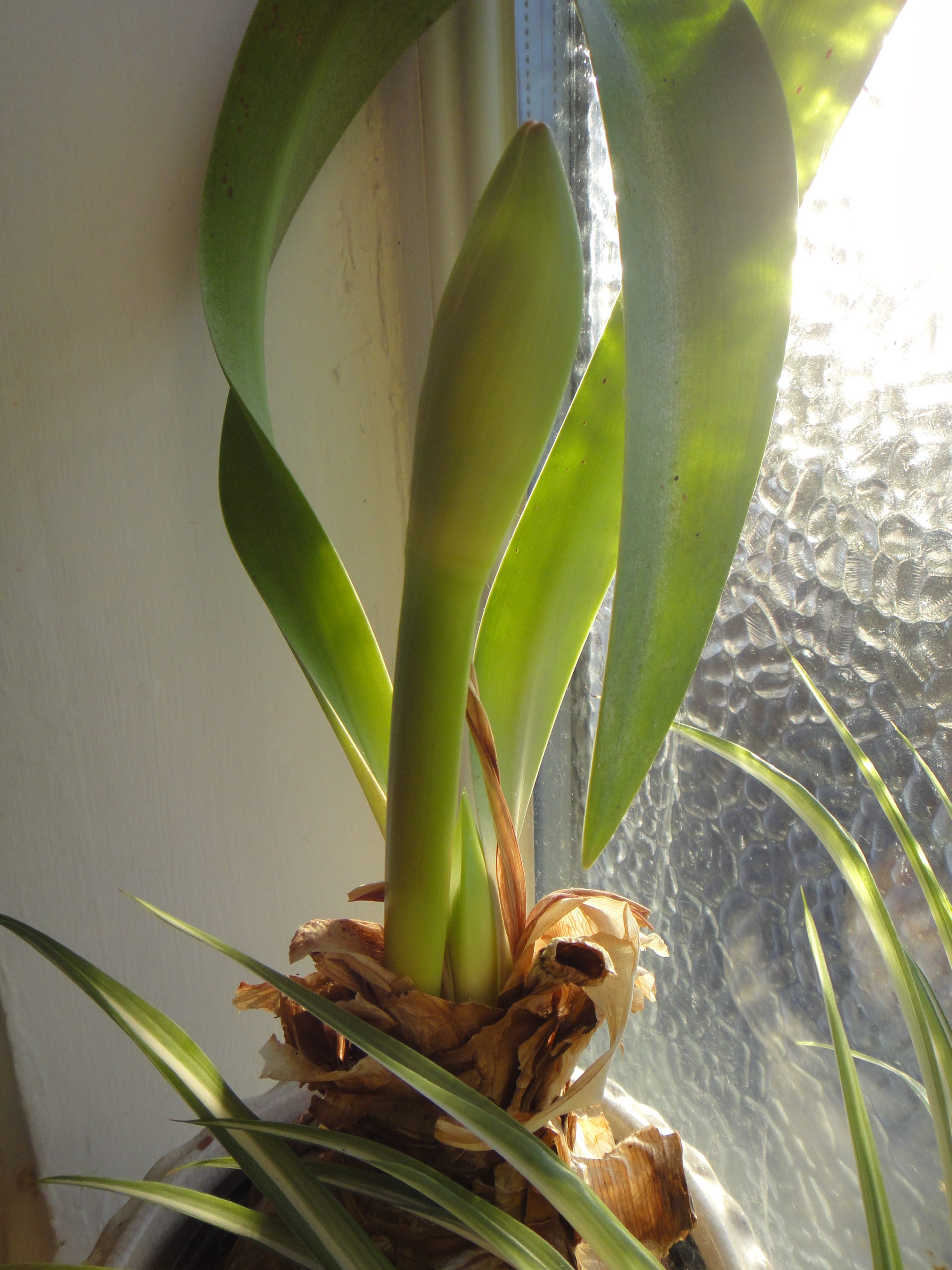 Rain all day, which has not been good for me. Increasing arthritis in my fingers means that I’m prone to dropping things, and I’ve been fairly immobile with back problems as well.

The rain finally cleared at teatime, leaving a brief but rather spectacular winter sunset. 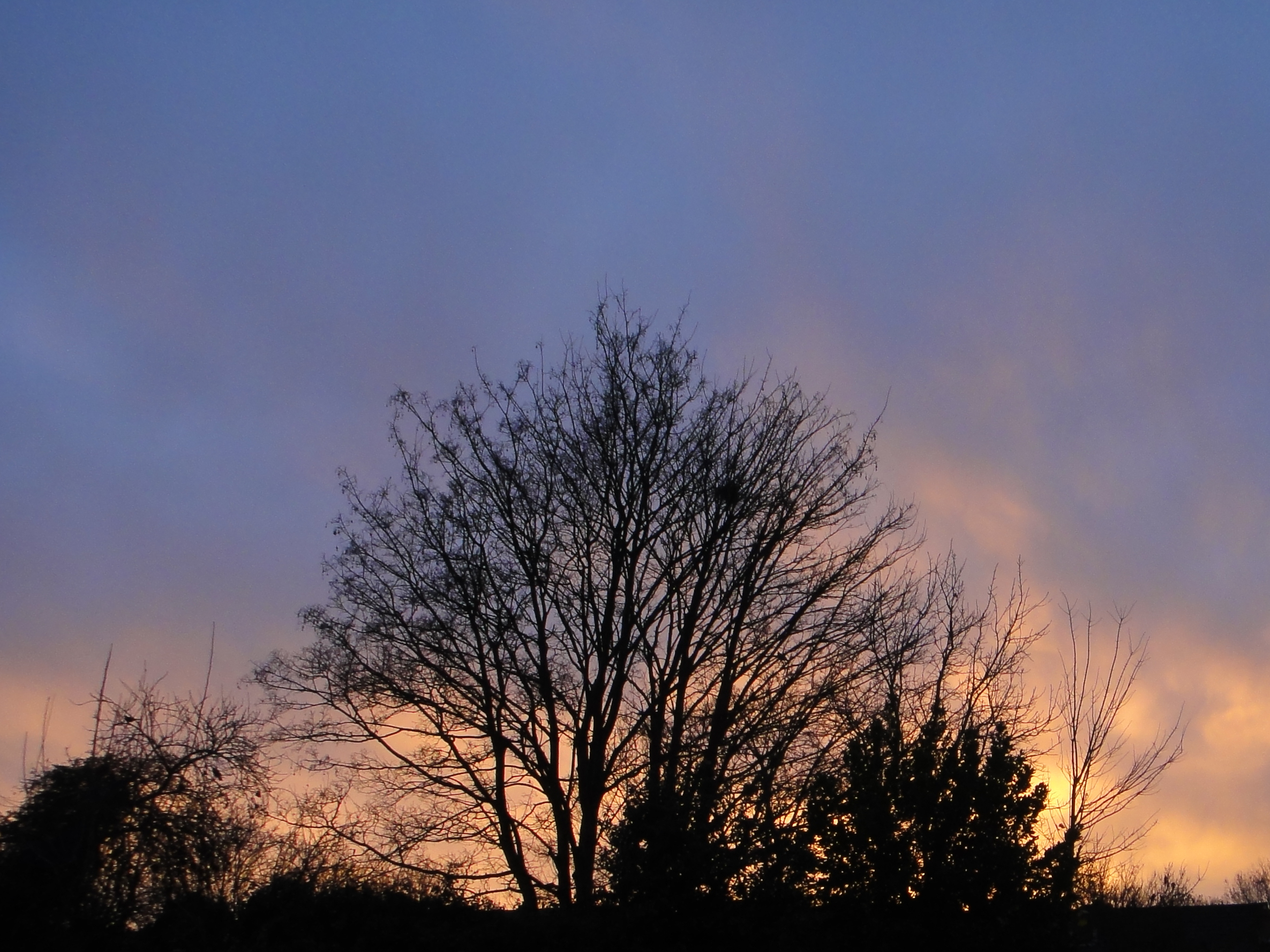 The garden rarely sees much of me between the end of November and mid-March, bar a quick sortie to pick veg or put peelings in the compost bin. But this morning I noticed that the daffodils have started to come up, both in the front bed and in the pot outside the French window. A quick investigate shows no signs of the ones further up the garden yet.

It’s a few days yet until the Solstice, but this start of new season’s growth is in a rather real sense the turning of the year for me. 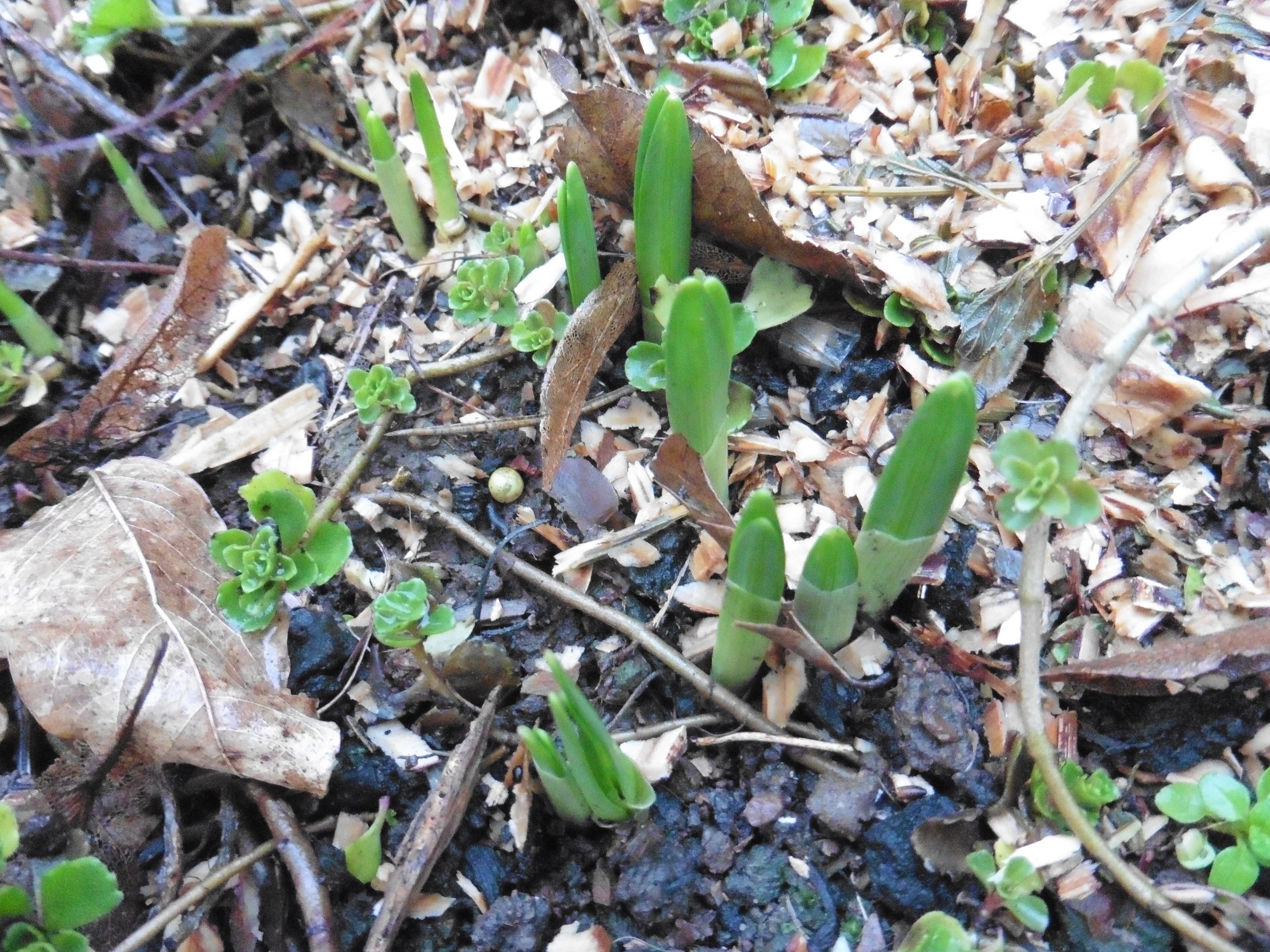 In the winter absence of “flowers from the garden”, I’ve put an orchid (dendrobium) on the coffee table, where it’s catching a fleeting ray of sunshine.
It’s a descendant of the one my brother sent me as a “moving in present” some nine years ago, when I first moved to Worcester. 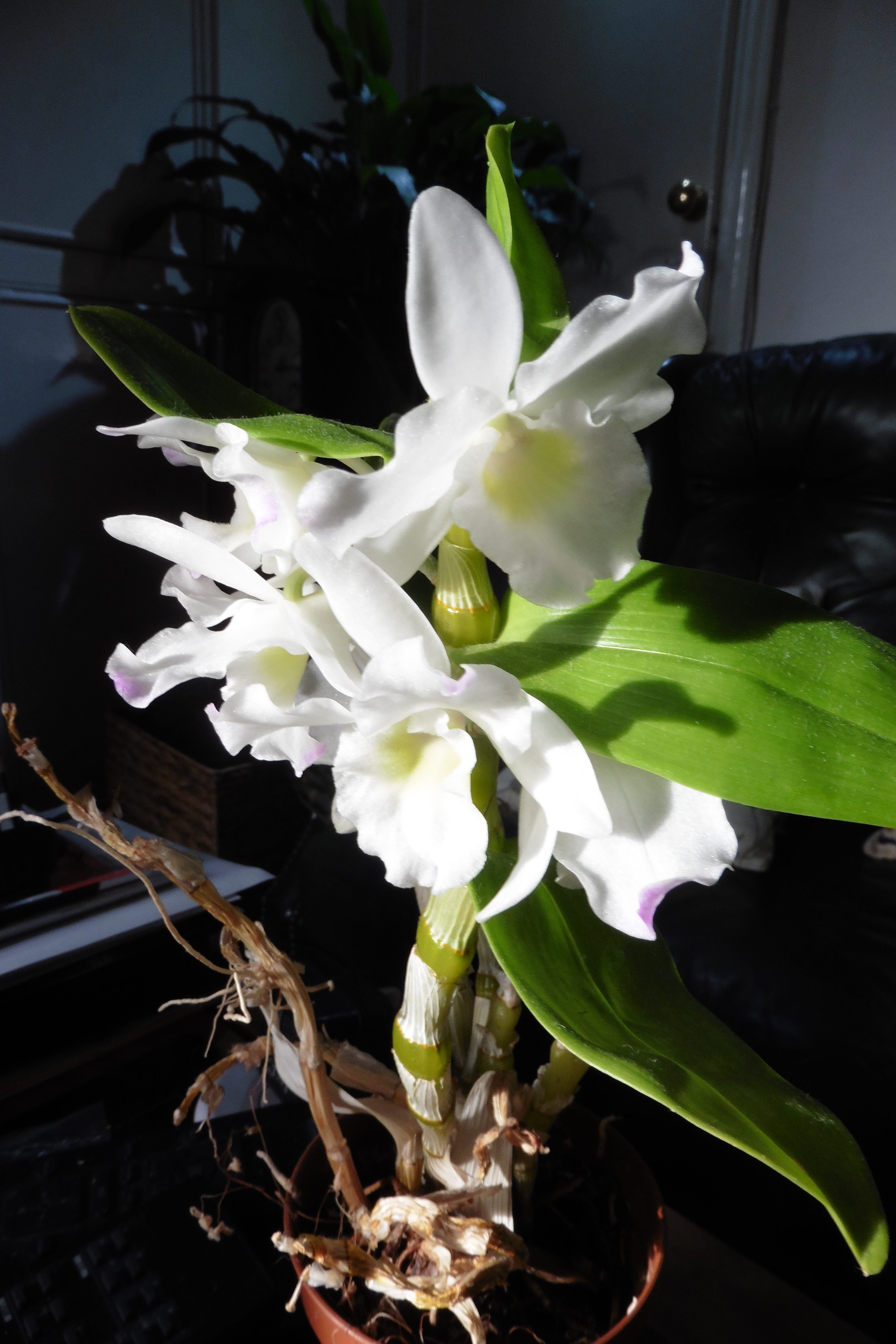 My bare-root patio peach tree (peach pygmy “Bonanza”) arrived this morning – whoopee! I didn’t want to leave it indoors, for fear of it thinking spring had come, so have planted it outside straight into the half-barrel it will live in. I’m a little worried, but outside temperature is around 5C, and I’ve coddled the base of the trunk and over the roots with a wodge of fleece … fingers crossed! 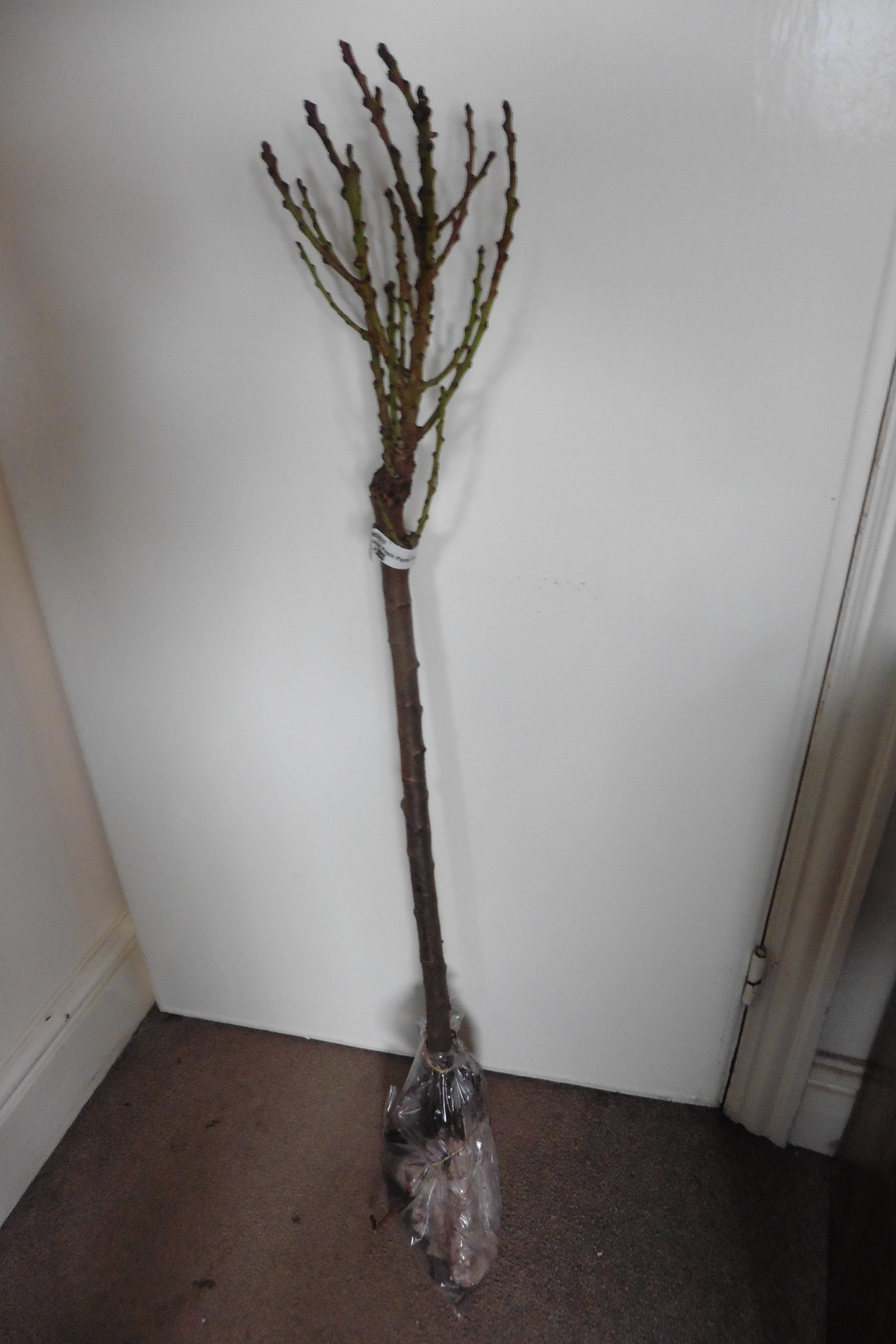 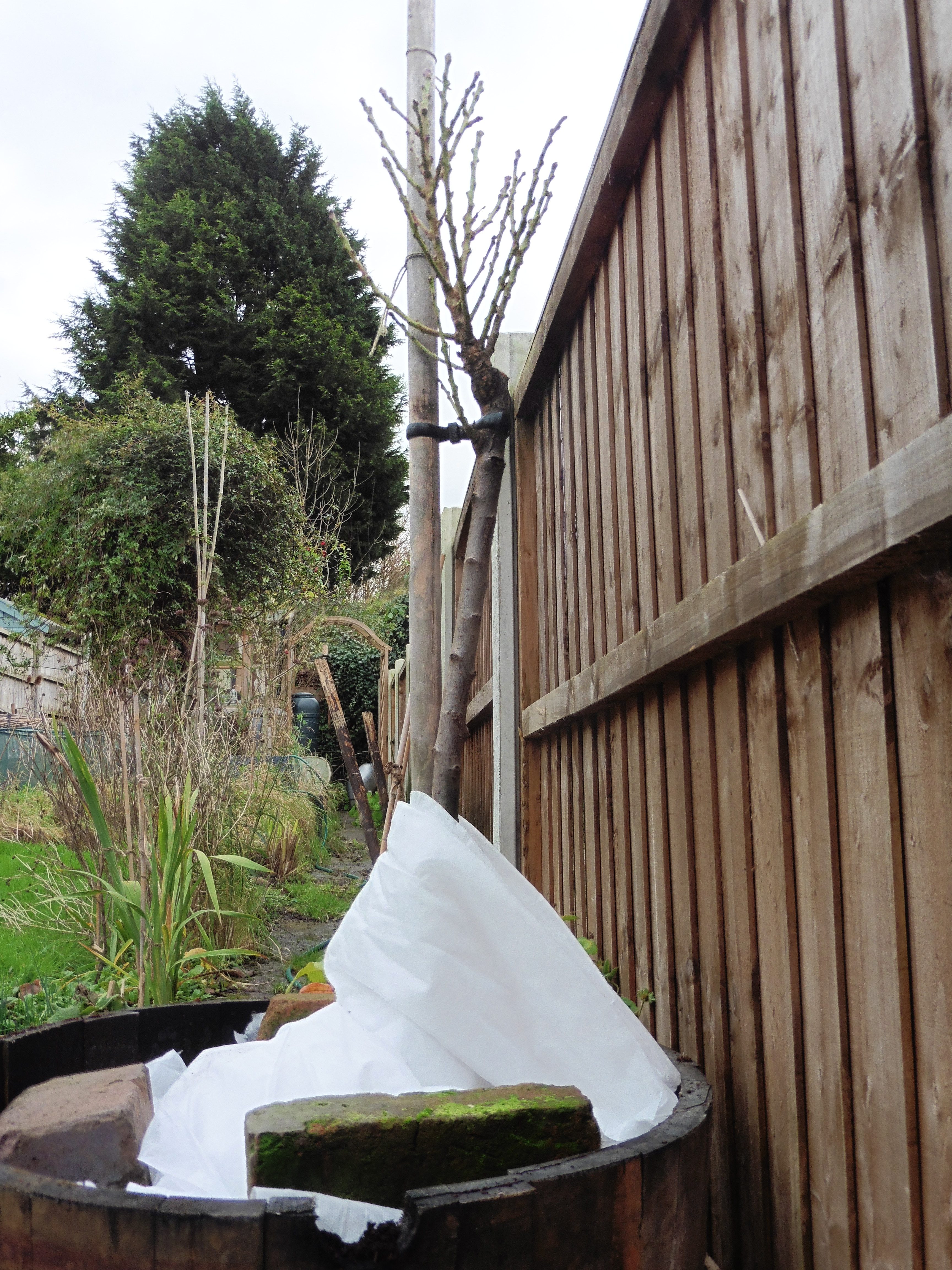 The first-ever flower on my winter jasmine! It’s from a self-rooted bit I took from my Mum’s about 18 months ago, so is still a youngster. Still, it’s a cheerful sight when I look out of the French windows. 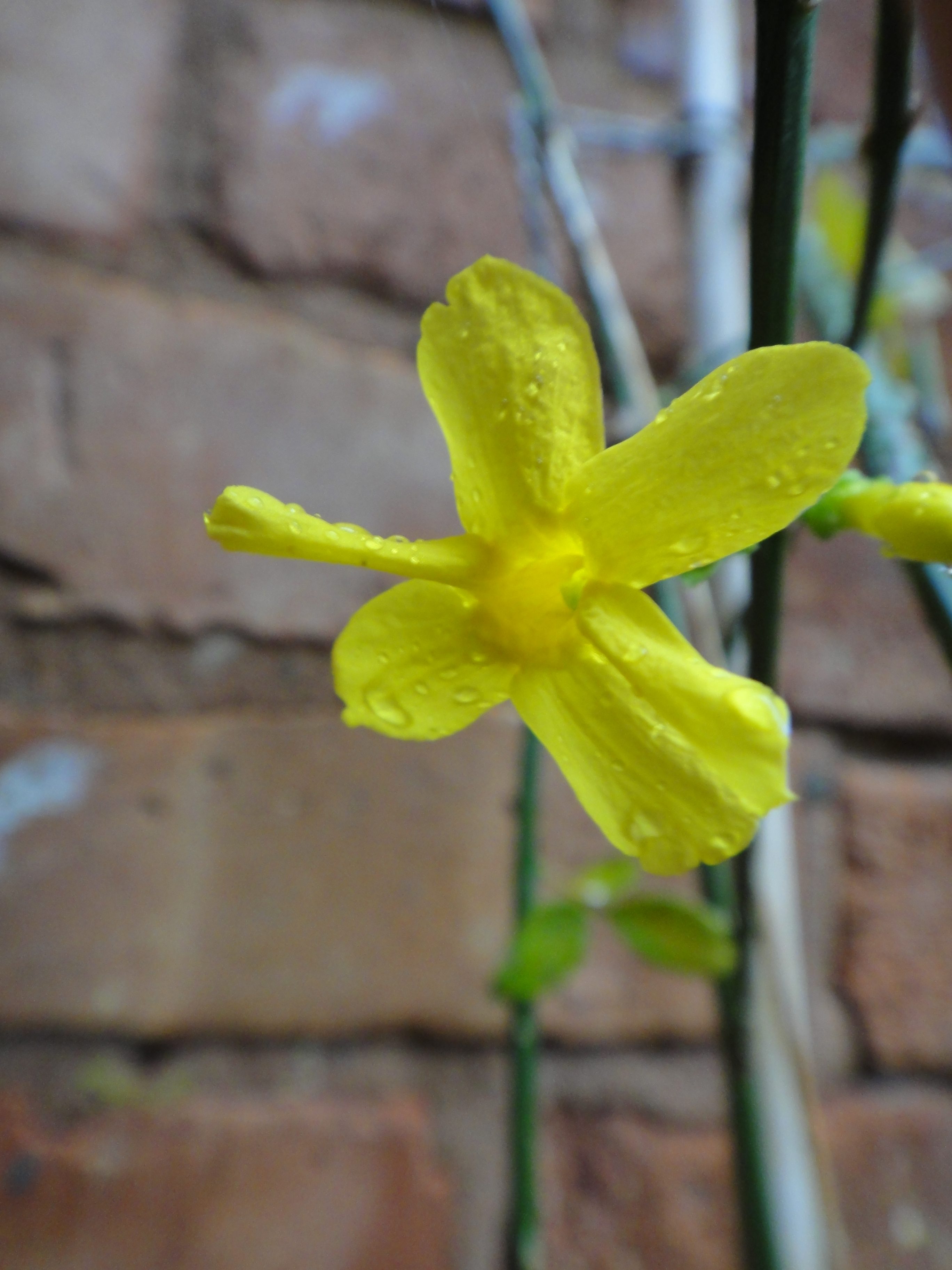 Somewhat battered, and the leaves are turning colour and falling off, but the Etoile de Hollande is still producing flowers for the coffee table.

It’s much the latest I’ve managed to have real flowers, as opposed to dried ones, since I moved to Worcester (nine years ago tomorrow), though the magnificent rose I had in the front garden when I lived in Tottenham occasionally produced buds as late as Christmas Day. 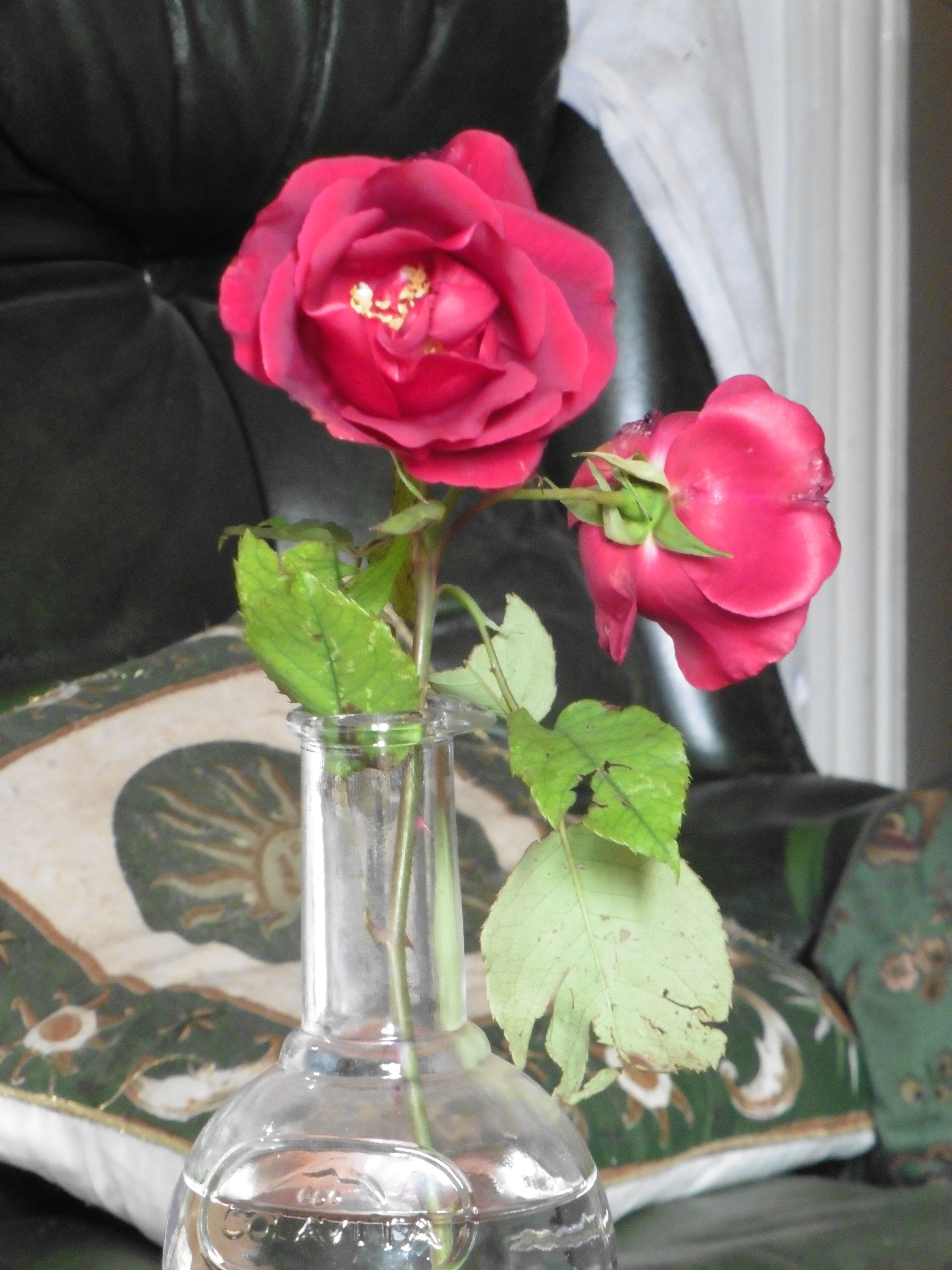 I failed to make parkin at Halloween (which is the traditional time for such indulgences).
.
However, this afternoon caught me in a “sod-the-diet” moment, and having the ingredients to hand I made a half batch. It needs to be stored for three or four days to achieve proper squidginess, of course, but an early sample showed that it tastes OK.
. 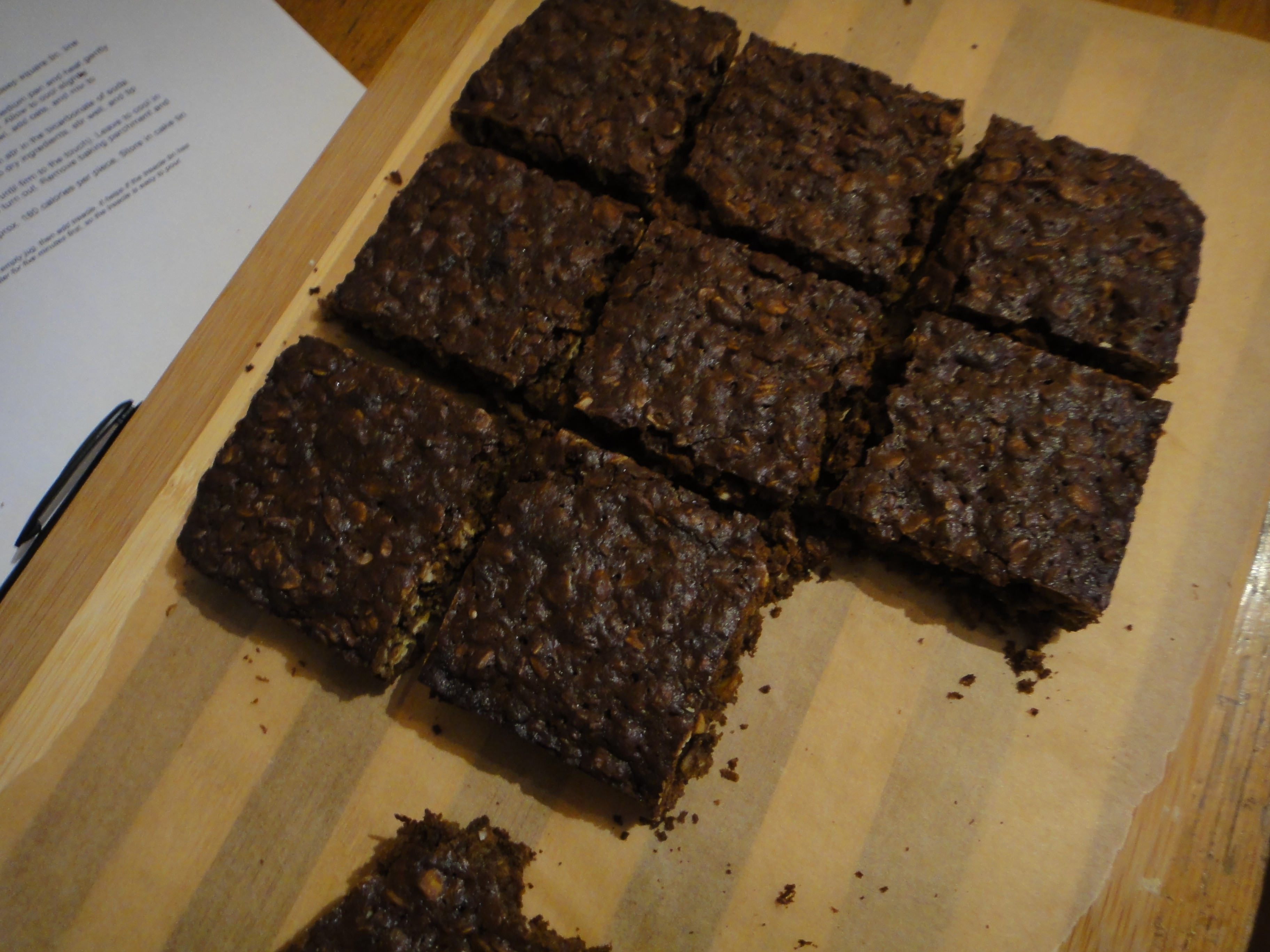 The first flowers are opening on the winter-flowering clematis, I’m pleased to see. It’s about when I’d normally expect them … last year they didn’t appear until mid-December! 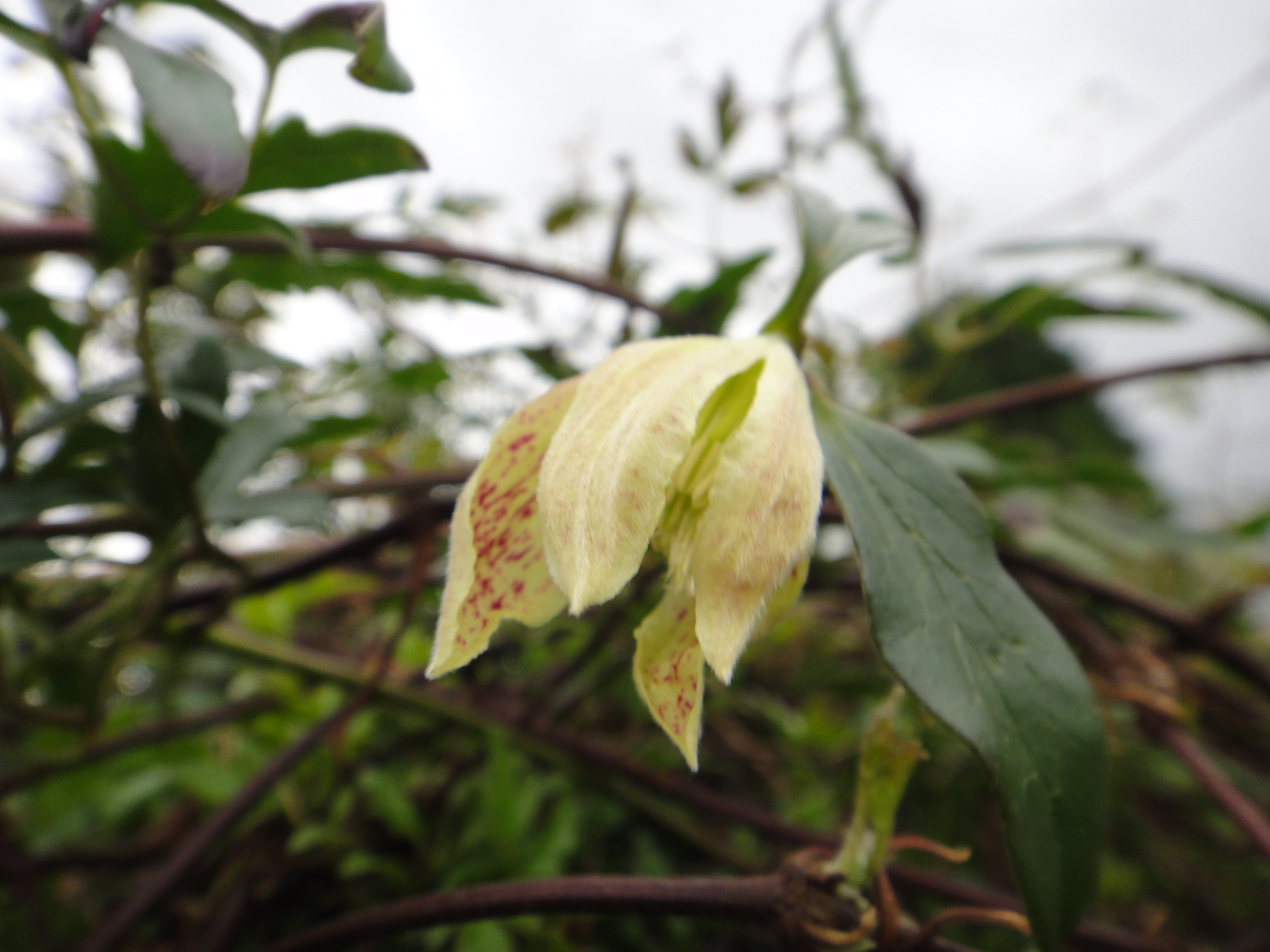 Eeeek!
The whole house is shaking! A rattling from the crockery cupboard, leaves of houseplants waving gently, and a bone-throbbing vibration in my chair … I hope the house’s Victorian foundations (such as they are) can cope.
It’s not an earthquake, though. It’s the very long-overdue resurfacing of the road outside. Yes, after years of temporary repairs, me filling in the “online pothole report form”, watching pigeons pecking grit from the sides of the assorted “repairs”, it’s finally happened. 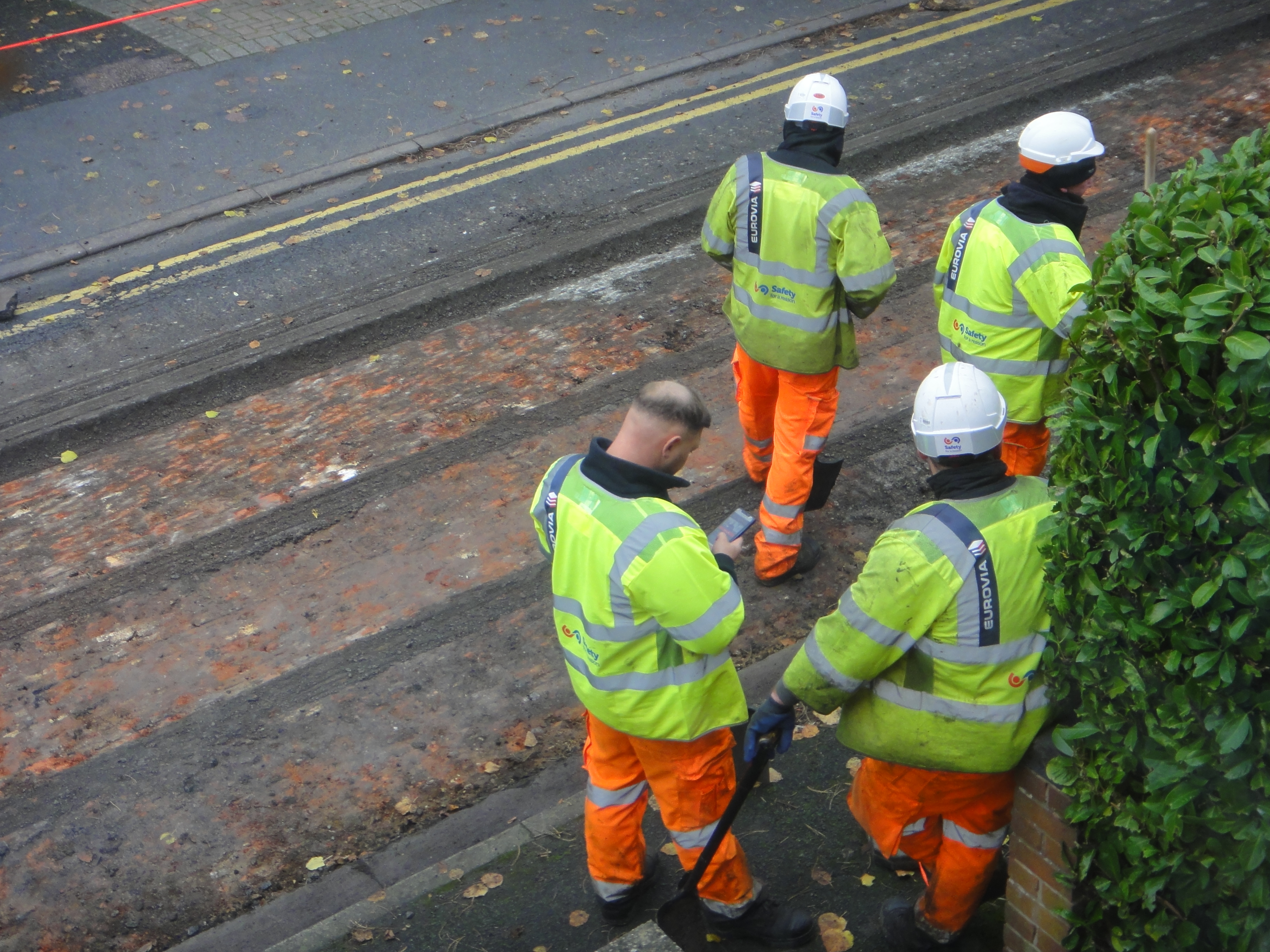 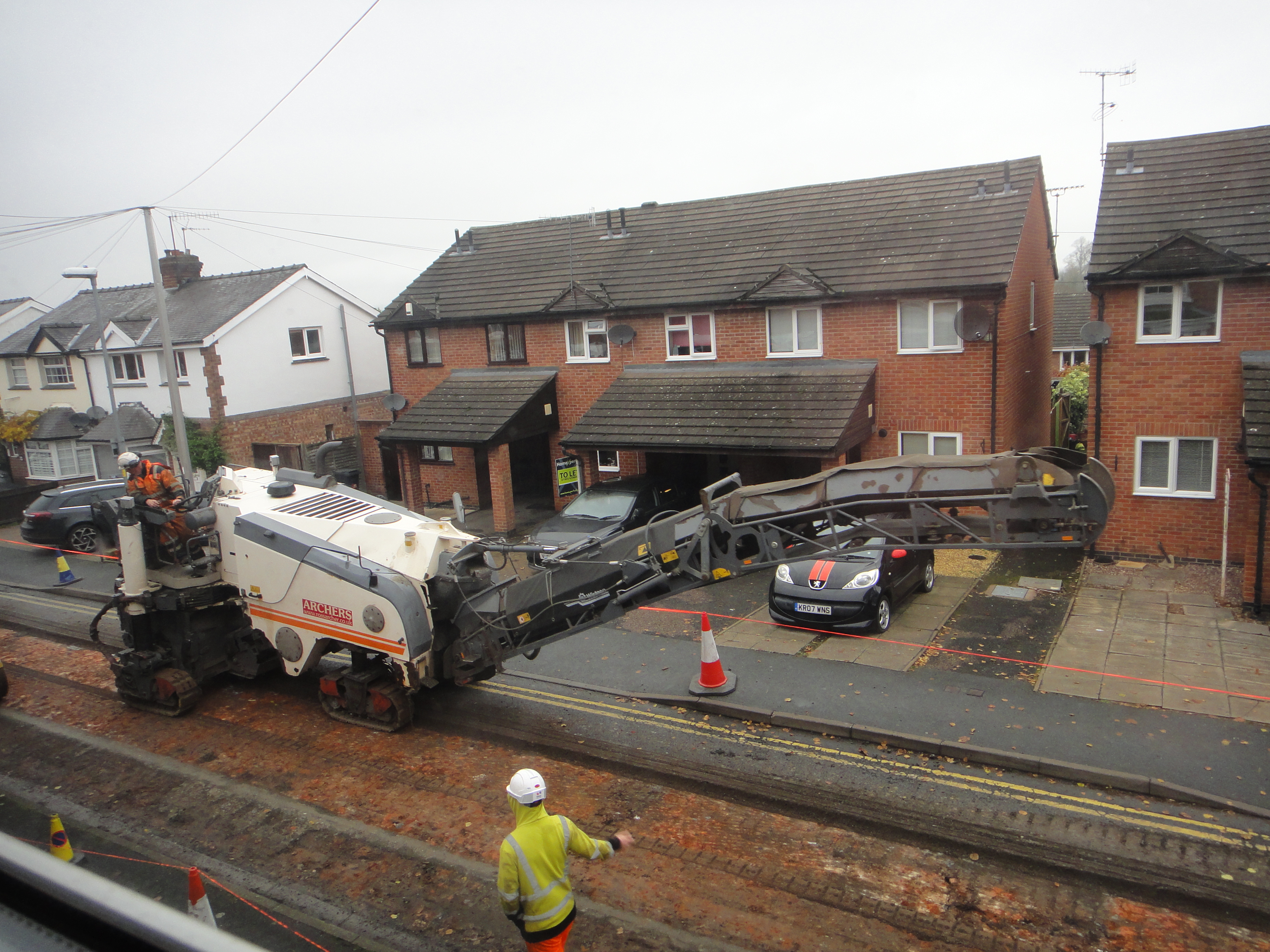 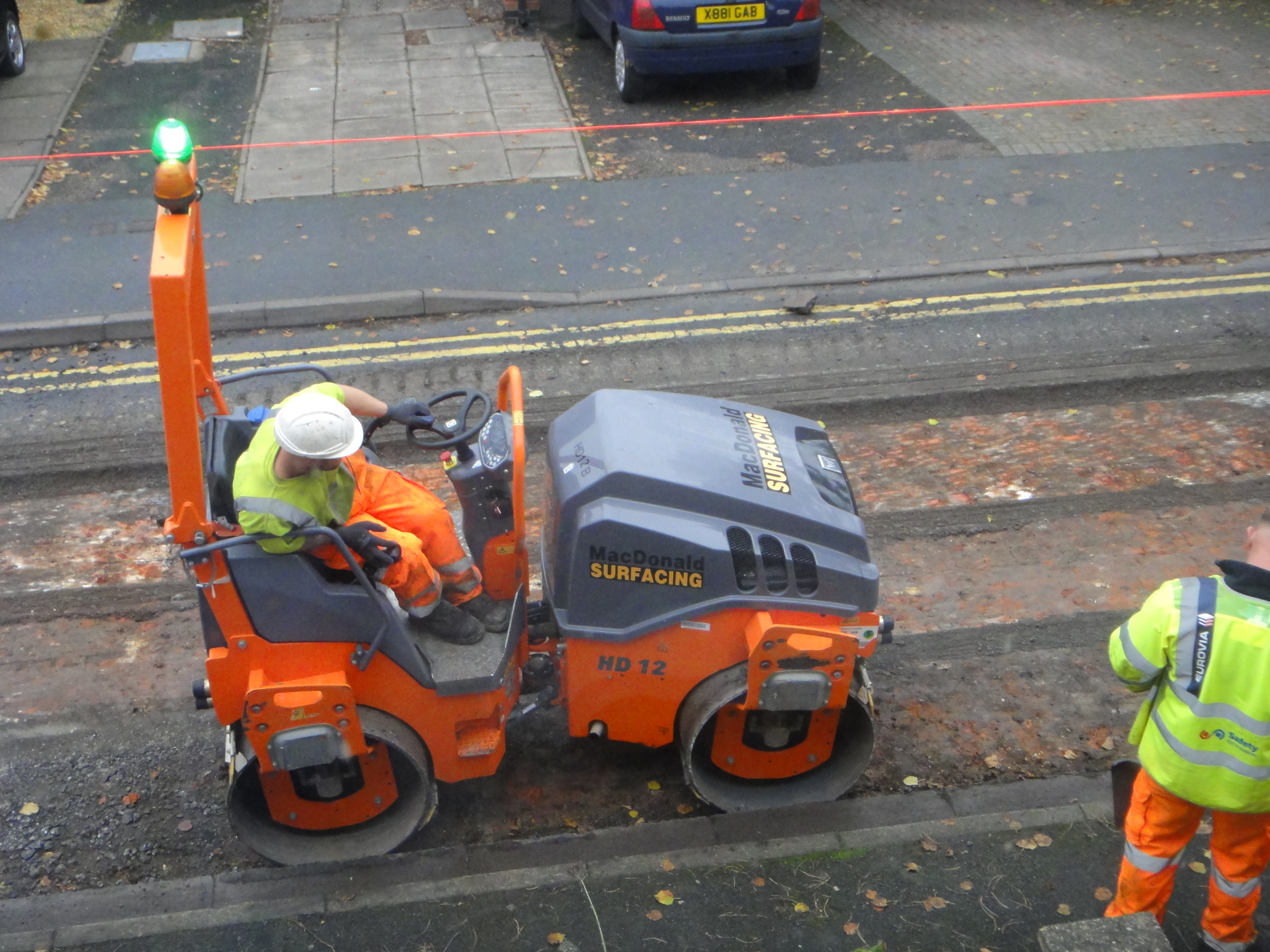